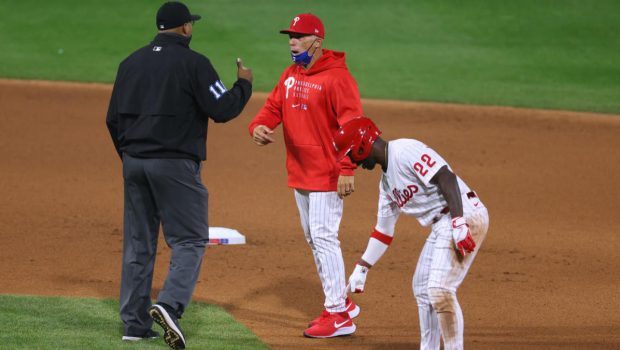 IT TOOK A TERRIBLE CALL AND A WALK-OFF HR TO BEAT THE PHILS!

Michael Conforto hit a tie-breaking homer leading off the ninth and the New York Mets benefited from a very questionable call by the second base umpire in a 5-4 victory over the Phillies.

Conforto also had a two-run double in a four-run first inning against former teammate Zack Wheeler. New York squandered the 4-0 lead but recovered to win for just the fourth time in 12 games — even after center fielder Brandon Nimmo and third baseman J.D. Davis exited with hand injuries.

“Conforto was ready and got his pitch,” Mets manager Luis Rojas said.

Alec Bohm hit a two-run homer for the Phillies, who have alternated wins and losses in their last 10 games. Philly hasn’t won consecutive games since a three-game sweep of Atlanta to open the season.

With one out in the bottom of the seventh inning, second base ump Jose Navas ruled Andrew McCutchen ran out of the baseline to avoid an attempted tag by shortstop Francisco Lindor on what became an inning-ending double play. Replays showed McCutchen ran in a straight line from first to second.

“That was about as straight of a line as you can run,” Phillies manager Joe Girardi said. “It’s a terrible call. The sad thing about it is, not reviewable. I’m sorry, that’s as clear as it can be and it might have cost us the game.”

Phillies slugger Bryce Harper, sitting out after getting hit in the face by a pitch Wednesday, was ejected for arguing from the top step of the dugout.

“It definitely can test your patience,” McCutchen said. “It can definitely be frustrating when they get out of that inning like that.”

Navas was involved in another shaky call last week when Minnesota lefty J.A. Happ was trying for a no-hitter against Pittsburgh. Navas was behind the plate when he ruled Wilmer Difo out for running too far inside the baseline and thus interfering with a throw.

Philadelphia pitchers had retired 14 consecutive batters before Conforto drove an 0-1 delivery from Hector Neris (1-3) over the wall in right-center.