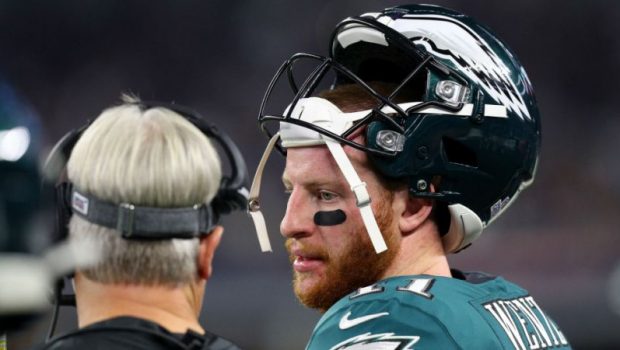 Carson Wentz was “embarrassed” by the Eagles’ performance in their 37-10 defeat to the Dallas Cowboys.

It marks a second successive defeat for the Eagles, who are now 3-4 for the season, with a road game against the Buffalo Bills next up.

Quarterback Wentz, who was 16-of-26 passing for just 191 yards, acknowledged he and his offensive team-mates must step up.

“Frustrated, a little embarrassed, they beat the c**p out of us, we didn’t show up and we’ve got to be better but I’m confident in this group,” he told a media conference.

“We got down early and made it tough on ourselves so late in the game we were forced to throw the ball early and they were pushing us back.

“There’s things I can do better, I’ve got to have better pocket presence and help those guys out as well. At the end of the day we’ve got to all be better.

“It sucks, we have to fix it. Especially the way we’ve played, back-to-back, there’s things we’ve got to fix but I’m confident we can fix them and get it going in the right direction.”

Wentz, however, does believe the defeats will help unify the Eagles’ roster.

“I love the locker room, you never want to lose but I think it’s going to pull us together. It’ll make us look in the mirror individually but it’ll pull us together as a group,” Wentz added.

“I know what we’re all capable of, I know if we stay together we can bounce back. We had a rough night, we’re going to own it and move on.

“We’re going to rebound from it and I’m confident we’ll be alright.”

While echoing Wentz’s suggestion that the whole team need to improve, Eagles coach Doug Pederson insisted it was his responsibility to turn results around.

“I had a lot of confidence in this football team, a lot of trust and faith in the guys, a good week of preparation,” he told a news conference.

“After a game like this we all have to take a step back and look in the mirror, especially for me. This is one of those games I take personally and from that point we didn’t play well, that’s on me and I’ve got to get it fixed.”