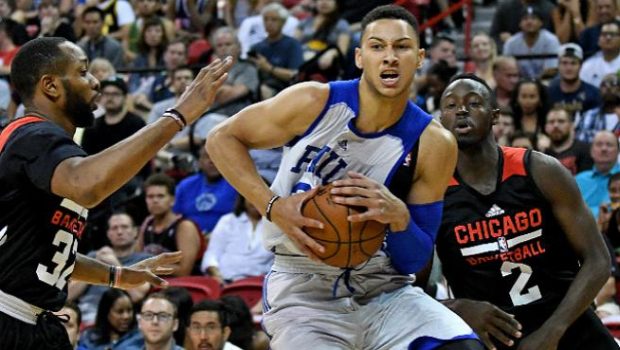 ISIAH THOMAS, A FOOL, CALLS OUT SIXERS’ SIMMONS FOR NOT PLAYING!

Sixers coach Brett Brown said Ben Simmons wanted to play, but after consulting with the team’s coaches and medical staff it was decided to rest him. “This is our direction, it has nothing to do with him,” Brown, who said it was his duty to look after the health of his young players, said.

America is a great country.

If you ever had any doubt about this, consider that even an awful NBA analyst like the fool Isiah Thomas has a right to his opinion!

The 76ers opted not to play Simmons for a second consecutive day last night when they took on the Brooklyn Nets.

Brown said Simmons wanted to play, but after consulting with the team’s coaches and medical staff it was decided to rest him.

“This is our direction, it has nothing to do with him,” Brown, who said it was his duty to look after the health of his young players, told ESPN.

Thomas, a 12-time All-Star and Hall of Fame inductee who won two NBA titles with the Detroit Pistons, was not happy to see top draft pick Simmons sitting out.

“Earn your money, get on the floor and play.”

Simmons’ status for the Sixers’ final summer league game on tonight is uncertain.

Simmons has sat out the last two games due to rest. But now that the Sixers are in the consolation round, they may very well want to continue to be cautious with their No. 1 overall pick.

“I am not sure,” Sixers assistant and summer league coach Lloyd Pierce said of Simmons playing. “We are banged up. We want to get out of here healthy and that is the most important thing… I think the biggest concern tomorrow is health. It is going to be a collective decision I think and we got to go off what Ben says and then management and our training staff as well.”

“We have just scheduled rest yesterday and today (for Simmons),” Pierce added. “It has been a very long summer and a long process. We don’t want to get too much and get greedy and it be an even longer summer.”

Melbourne-born Simmons will earn more than $5 million in his rookie year with the 76ers and signed a $20 million endorsement deal with Nike.

Simmons has had highs and lows during his Summer League games for the 76ers, which feature rookie, second-year and young free agents.

He has been described as a “mini-LeBron James” and his passing skills have received rave reviews.

However, Simmons has been criticized for not shooting enough. Simmons, in his debut for the 76ers in Utah on July 4 against the Boston Celtics, had to be helped off the court after suffering cramps in his legs.

In his three games in Las Vegas Simmons has averaged 11 points, seven rebounds, five assists and 29.7 minutes per game.