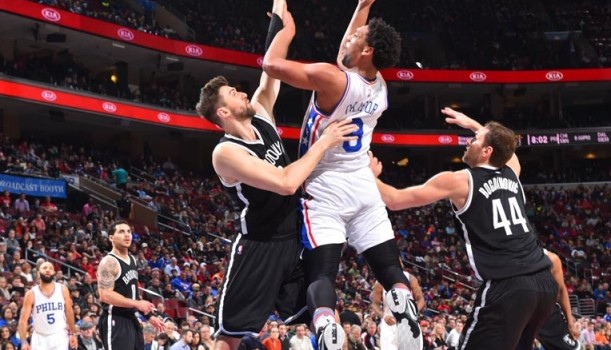 No Ish? No problem!

T. J. McConnell, filling in for the injured starting point guard Ish Smith, tied a career high with 17 points to help the Sixers beat the Nets, 103-98 last night at the Wells.

Jahlil Okafor (above) had 22 points and 17 rebounds and Nerlens Noel added 18 points, coming through with a key dunk late in the fourth quarter.

McConnell, a rookie, was a big reason that the 76ers were able to earn an eighth win while ending a four-game losing streak.

McConnell credited Smith, who injured his ankle after scoring 22 points in a 106-94 loss at Washington on Friday night.

“I was just trying to do my best impression of him tonight,” McConnell said.

Although they improved to just 8-43, the 76ers have improved since late they acquired Smith from New Orleans in late December. They have gone 6-13 with him in the lineup.

“From the moment he got here, I think our team played for the better,” McConnell said. “Even while Ish was on the bench, he was showing leadership.”

Thaddeus Young scored all of 22 his points after halftime for the Nets, who were trying to win a second consecutive game for the first time since Dec. 10. Young added 10 rebounds, and Brook Lopez had 17 points.

The Nets trailed by as many as 15 points in the first half and were down by 69-64 entering the fourth quarter. Markel Brown’s third 3-pointer of the game gave the Nets their biggest lead, at 86-81, with 6 minutes 59 seconds remaining. But the 76ers scored 8 of the next 10 points and took back the lead on Hollis Thompson’s 3-pointer from the left wing, which made it 89-88 with 4:44 left. The Nets moved ahead again, but Robert Covington drained a 3-pointer with 1:16 to play, putting the 76ers up, 97-96.

Both teams missed field goals on ensuing possessions before McConnell’s steal led to Noel’s dunk with 21.3 seconds remaining. That made it 99-96, enough for Philadelphia to earn its seventh win in the last 20 games.

“When you get consistent how you play, then we’ll start turning these games into wins,” said Tony Brown, the Nets’ interim coach. “I commend them for getting back in it, but obviously there’s still a lot of work we have to do.”

Markel Brown, who entered averaging just 2.5 points per game, was perfect from the field while setting a season high with 15 points for the Nets. Brown made all five of his shots, including three 3-pointers.

“He was very decisive,” Tony Brown said. “It was good to see that. He saw shots and took them, and the ball was falling for him.”

Markel Brown, known as a defensive specialist, said he had been working hard on his jump shot.

“I’m trying to elevate my game to not be one-dimensional,” he said.

The Nets set a season high for points in Friday’s 128-119 home victory over the Kings, but on Saturday, they mustered just 12 points while sleepwalking through the first quarter. They turned the ball over 11 times and missed 12 of 17 shots in the quarter.

“That hurt us, and that triggered down through the whole game,” said Joe Johnson, who finished with 9 points. “We never got in sync.”

The loss ended the Nets’ three-game road winning streak against the 76ers. The Nets’ last consecutive victories were Dec. 8 and Dec. 10, when they defeated the Rockets and the 76ers.