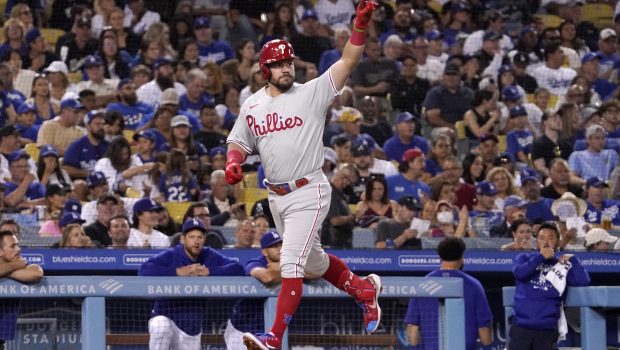 IS THIS THE PHILS BEST? NOT GOOD ENOUGH, SAYS MOOKIE BETTS!

By Tim Squires and the Associated Press

Mookie Betts homered, doubled and singled, knocked in three runs, threw out the potential go-ahead run at the plate and sparked the Los Angeles Dodgers out of a 4-1 hole to their seventh straight win, 7-4 over the Phillies.

José Alvarado (0-1) allowed two hits to open the eighth and took the loss. Daniel Hudson (2-3) pitched 1 1/3 scoreless inning of relief and earned the win. Craig Kimbrel, the last of eight Dodgers pitchers, worked a scoreless ninth for his ninth save.

Bryce Harper went 1 for 4 as the designated hitter in his first game in a week. The 2021 NL MVP was one of the hottest hitters in baseball before he was forced out of the lineup. He won NL player of the week honors for batting .609 (14 for 23) with three homers, six doubles, eight RBI and a 1.904 OPS in six games, three of them at Dodger Stadium.

Harper had a platelet-rich plasma injection in his right elbow and the lingering soreness kept him out of five straight games.

The Phillies had just four runs scored and three losses over the first four games of the homestand without Harper. Perhaps buoyed by Harper’s return, the Phillies scored four runs through four innings in a bullpen game for the Dodgers.

Leading 1-0 in the second, Alec Bohm hit a two-run homer, his third of the season, off Mitch White for a 3-1 lead.

Kyle Schwarber, batting only .199 entering the game, hit a solo shot in the fourth for a 4-1 lead. Schwarber’s homer tied him for first in the National League with 10. It was only his second at home and first since opening day.

Aaron Nola couldn’t hold the lead and still has not won since opening day.

Betts was Nola’s nemesis in this one. Betts crushed his ninth homer of the season into the left field seats in the third and tied the game 1-all. One Phillies fan unimpressed by the souvenir chucked the ball back onto the field.