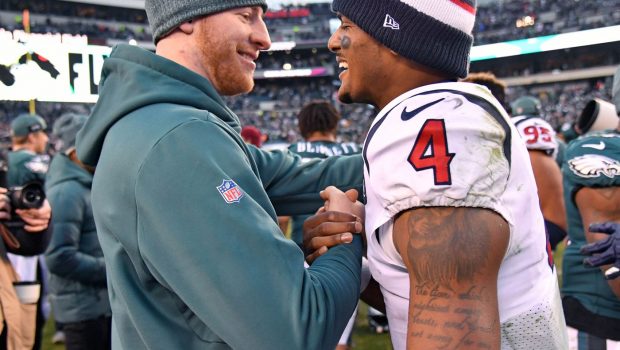 IS THIS A GREAT COUNTRY OR WHAT! ASSHOLE WATSON WILL SUE NFL

Put this in the following category

BALLS OVER BRAINS, or

IS THIS A GREAT COUNTRY OR WHAT!

Yahoo’s Charles Robinson reports Deshaun Watson will sue the NFL if he is suspended for the entire 2022 NFL season.

Robinson said Watson and the NFL players union “have already made the decision to file a lawsuit against the league in federal court” if Watson is slapped with a yearlong suspension after being accused of sexual assault and misconduct by dozens of women.

Such a move would further drag out the never-ending Watson saga.

The timing of arbitrator Sue Robinson’s decision on Watson’s punishment remains unclear as the Browns prepare for training camp.

Watson could face as little as a month-long suspension, or no suspension at all, though that seems unlikely after more allegations surfaced following Cleveland’s trade for Watson.