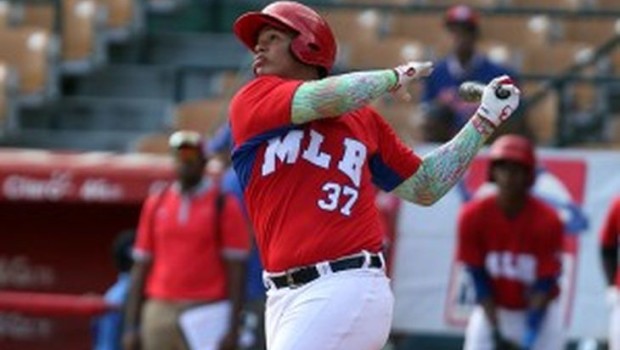 IS THIS 16-YEAR-OLD THE PHILLIES’ BIG PAPI OF THE FUTURE?

The Phillies have seen the future, and his name is Jhailyn Oritz.

But Ortiz also is just 16, which means he is several years away from playing in Philly.

But Phils player development director Joe Jordan recently visited the Dominican Republic and got another look at Ortiz, who MLB.com ranked as the eighth-best prospect in this year’s international free-agent class.

“I believe we saw a lot of what our scouts saw and liked,” Jordan said. “He had a really good week. I really believe that the kid has a chance to be a good hitter. He’s 16 years old, but he did some things that I thought were a little advanced. He had a good two-strike approach. He really hit some balls hard.

“Balls just come off his bat differently than almost all of the kids down there. It was a very impressive week, but we’ve got a lot of work to do.”

Of course, handing a $4 million signing bonus to a 16-year-old kid is a considerable risk. But former Phillies president and general manager Pat Gillick frequently said teams cannot be afraid to take such risks.