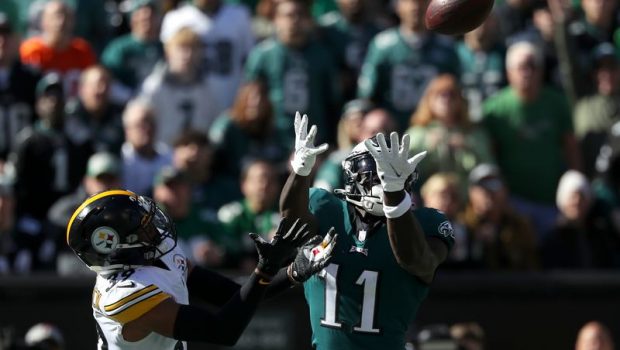 IS THERE A BETTER RECEIVER IN NFL THAN BIRDS AJ BROWN?!

Jalen Hurts threw three touchdowns to A.J Brown in the first half and the undefeated Eagles raced past the Pittsburgh Steelers 35-13.

Brown had six receptions for 156 yards. The Eagles are 7-0 for the second time in franchise history and first since 2004, when Donovan McNabb and Terrell Owens led them to the Super Bowl. In that season, the Eagles were denied an 8-0 start with a loss to the Steelers.

Pittsburgh (2-6) offered no resistance this time once Hurts and Brown turned the Linc into their own pitch-and-catch playground.

Brown might still be scoring in Tennessee had the Titans not felt in the spring his asking price for an extension was too high. Once the Titans decided they didn’t want to pay Brown, he was traded during the draft. The Eagles gave him a $100 million, four-year contract with $57 million guaranteed upon completing the trade.

Brown became the first receiver since Tennessee’s Drew Bennett in 2004 with three receiving touchdowns of 25-plus yards in the first half. Hurts hit Brown from 39 yards, 27 and 29 yards for a 21-10 halftime lead.

Brown made an over-the-shoulder grab in the end zone for the third score as Pittsburgh defenders Minkah Fitzpatrick and Ahkello Witherspoon collided with each other. Brown then pointed at each fallen foe as the crowd roared — and he was hit with a taunting penalty.

Their first TD might have been the most impressive. Brown went up to catch the 39-yard heave and won a battle for the ball with Fitzpatrick, who pounded the turf in frustration.

Brown had his best game in his short Eagles tenure, topping the 155 yards he had in the season opener against Detroit. He had only two touchdowns entering the game.

One knock on the Eagles this season was their second-half slowdowns. They had scored only four second-half touchdowns and were shut out after halftime against Minnesota and Washington.

Hurts waved off those concerns when threw a 39-yard TD pass to Zach Pascal in the third for a 28-10 lead.

The only player with more than four TD passes of 25-plus yards or more in a single game since 1980 was Hall of Famer Dan Marino, who had five in Week 1 of 1994 against the Patriots.

Hurts almost matched Marino in the fourth quarter, but Brown was tripped up at the 11 on a 43-yard pass. No worries. Miles Sanders rushed for the touchdown and a 35-13 lead on the next play.