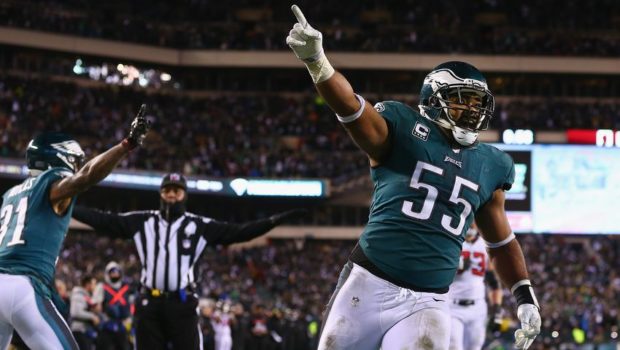 IS SUNDAY SAYONARA FOR EAGLES PETERS, GRAHAM, LONG AND FOLES?

Sunday’s Eagles-Texans game has obvious playoff implications for the 7-7 Birds, who have to run the table inn their last two games to have a hope to make it to January.

But it could also be the last game for some of Eagles fan faves:

Sunday’s game against the Houston Texans at Lincoln Financial Field could be the last time several key Philadelphia Eagles will play in front of the home crowd.

Foles, the reigning Super Bowl MVP, will make his second straight start this week. He completed 24 of 31 passes against the Los Angeles Rams for 270 yards, one interception and an 89.4 passer rating.

It was the third highest single-game completion percentage of his career, trailing only his game vs. Chicago (84 percent) on Dec. 22, 2013, and his seven-touchdown performance against the Oakland Raiders when he completed 78.57 percent on Nov. 3, 2013.

Foles started the first two games of the season as Carson Wentz recovered from offseason knee surgery, going 1-1 in those starts. Now, with Wentz out, but not expected to go on injured reserve, Foles is the starter again.

“I think every time he’s had the opportunity to play he’s been really effective, and we always are trying to build on things,” offensive coordinator Mike Groh told the Associated Press. “We have a lot of confidence in Nick and what he does well, and just keep going there.

“We’re focused on the Texans and trying to put another good plan together and play efficient football and have another balanced attack. Nick has proven himself over the course of time as an excellent quarterback in this league, and we’re lucky to have him.”

Brandon Graham and Long have expiring contracts, and Long considered retirement after last season. So, too, did Corey Graham.

Sproles said before the season that this year would be his last, but he has been injured for most of it, so maybe he reconsiders. Even if he does decide to go another year, he will be 36 and does not have a contract.

Peters is signed through next year but counts $10.6 million against the salary cap and turns 37 in January. He has been with the Eagles since the Eagles traded three draft picks, including a first-rounder, to Buffalo for him in 2009.