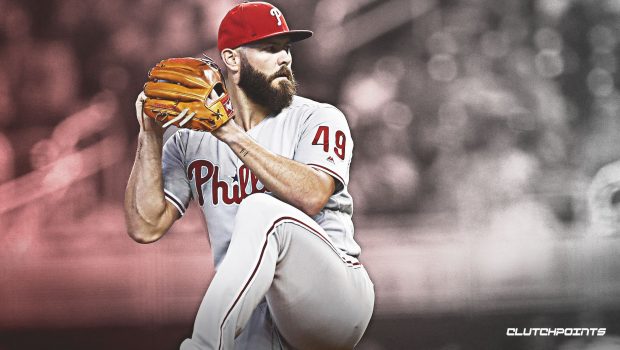 IS IT VELASQUEZ NO. 3 AND ARRIETA NO. 4 IN PHILS ROTATION?

There is a degree of uncertainty about the Phils pitching rotation.

And it has been assumed that Jake Arrieta (above) would be No. 3.

But NBCSP’s Jim Salisbury has made an incisive observation:

Late Sunday night, Girardi announced that Vince Velasquez would start Monday night’s exhibition game in New York at Yankee Stadium. That would put Velasquez in line to pitch Game 3 of the regular season.

Arrieta will be pushed back to an intrasquad game Wednesday in Philadelphia. That would put Arrieta in line to pitch Game 4 of the regular season in New York against the Yankees.

Girardi was vague in his reasoning for the pitching alignment, saying he didn’t want Velasquez to go too long between outings.

With no personal access to players because of COVID-19 protocols, it was impossible to speak with Velasquez or Arrieta to attempt to gain more clarity.

The bottom line is it appears that Velasquez will be in the rotation.

One thought on “IS IT VELASQUEZ NO. 3 AND ARRIETA NO. 4 IN PHILS ROTATION?”