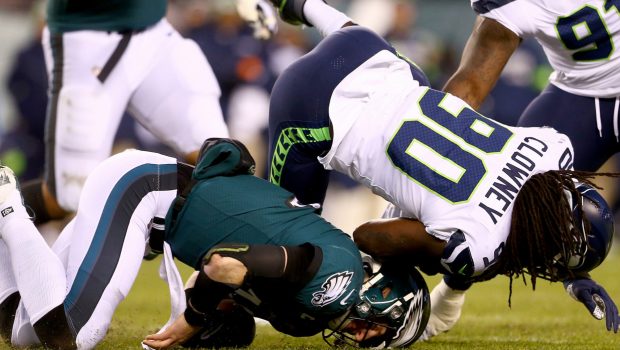 IS EAGLES WENTZ SNAKE-BIT OR IS HE JUST A FRAGILE ELITE QB?

No matter how good you think Eagles franchise quarterback Carson Wentz is, there is one undeniable fact that motivated the Birds to use the 53rd pick in last month’s draft to get a fresh-legged back-up in Jalen Hurts:

The Eagles will rise or fall on Wentz’s ability to stay healthy, which has been a real issue during his four-year career.

And while they were wise enough to have Nick Foles available to step in and deliver them a Super Bowl two seasons ago, Wentz missed the entire playoff ride that year and another several games in 2018 due to injury — his list of NFL injuries having now included his back, head, hand and knee.

In his first career playoff appearance last season, he was knocked out of the game with a concussion after attempting only one pass, and the Eagles went on to lose to the Seahawks when 40-year-old backup Josh McCown couldn’t channel any Foles Magic.

Wentz has the ability to be an elite quarterback in the NFL, but there’s a reason the club used their 2020 second-round pick on Hurts and not another position of extreme need. No matter how they spin it, Hurts provides them insurance, but what he doesn’t provide is the professional football experience required to make a deep playoff run.

The Eagles are expected to push the Cowboys to the brink atop the NFC East, but Wentz has to stay on the field for it to happen.