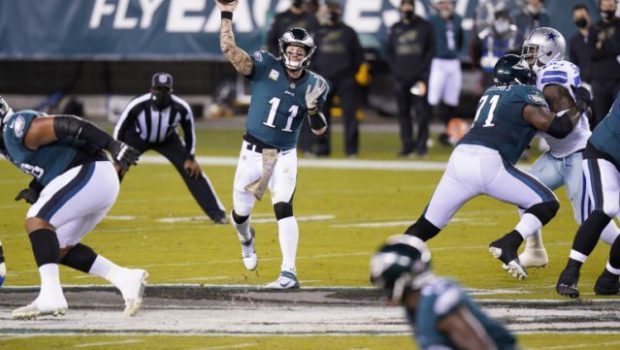 IS EAGLES WENTZ (12 PICKS, 8 GAMES) EVER GOING TO BE GREAT AGAIN?

Last Sunday night the Eagles beat the Dallas Cowboys 23-9 at LFF, but for many the win wasn’t a reason to celebrate.

Carson Wentz’s erratic season from hell continues — this time he threw two interceptions and he lost two fumbles for 4 turnovers. A truly awful performance for a QB in his 5th NFL season!

As post-game analyst Ray Didinger stated, the Birds would have lost if they were playing any other team except the inept Cowboys!

The Cowboys third-string QB Ben DiNucci played just as a player who didn’t deserve to wear an NFL uniform should, terrible.

What’s going on with Wentz turnover-machine season is a mystery to all. Through 8 games he’s thrown 12 INT’s, along with 4 fumbles lost with a QB rating of 61.2.

Amazingly the Birds still are in 1st place in the NFC East, acknowledged as the worst division in football.

Getting hurt players back is their only salvation going forward in this crazy pandemic season.

After the bye week they can hope to get RT Lane Johnson back, also RB Miles Sanders should be ready to go when they travel to East Rutherford, NJ to take on the New York Giants, November 15, 1pm/Fox