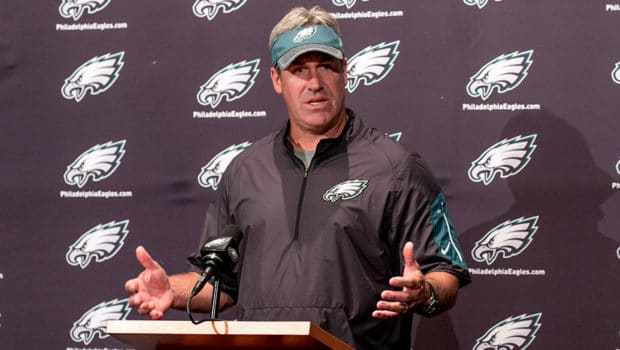 IS EAGLES COACH DOUG PEDERSON REALLY UP TO THE TASK?

Today’s Eagles-Browns game at the Linc will be the roll-out of big bucks Eagles quarterback Carson Wentz.

But just as important will be the debut of untested coach Doug Pederson.

As a rookie head coach, Pederson has a lot to prove. He wasn’t highly sought after while teams were looking to make coaching hires this offseason, and he wasn’t even necessarily the Eagles’ top option.

His play-calling experience is very limited; he only started to handle those duties on a limited basis with the Kansas City Chiefs last season.

There are also concerns about Pederson’s in-game management of the clock due to the struggles of his mentor: Andy Reid. The 2016 season alone likely won’t determine if Pederson is a good coach or not, but if ever there were a season to make a good first impression, this is it.