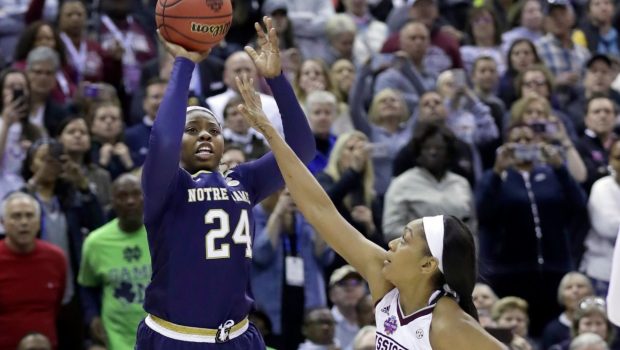 “We just constantly focus on what we have, what we can do, who’s going to step up?” Notre Dame coach Muffet McGraw said before yesterday’s NCAA championship game against Mississippi State.

With the score tied at 58, Notre Dame’s Arike Ogunbowale (above) stepped up to be the hero. The junior guard hit a 3-pointer from the corner with a tenth of a second left in the game to lead the Fighting Irish to a 61-58 victory.

The heroics came after Ogunbowale hit a game-winning shot in overtime to shock previously unbeaten Connecticut in a national semifinal game on Friday.

“I work at it in practice all the time,” Ogunbowale said. “My teammates can attest to that. It just felt right.”

For most of the game, it appeared as if Mississippi State would be the team raising the trophy. Notre Dame entered the final averaging 92.4 points in five NCAA tournament games, but were held to a season-low 17 points in the first half by a tenacious Bulldogs defense.

Mississippi State led by as many as 15 points in the third quarter. But as they did against Connecticut, Notre Dame clawed back from a double-digit deficit to even the game at 41 heading into the fourth quarter.

The final minute featured a wild sequence in which both teams had a chance to take the lead with Mississippi State center Teaira McCowan stealing the ball, teammate Morgan William losing possession after getting bumped, and McCowan fouling out during the ensuing scramble.

“They really dug deep. That Fighting Irish spirit. They would just not be denied,” McGraw, who played at St. Joe’s in Philly, said.