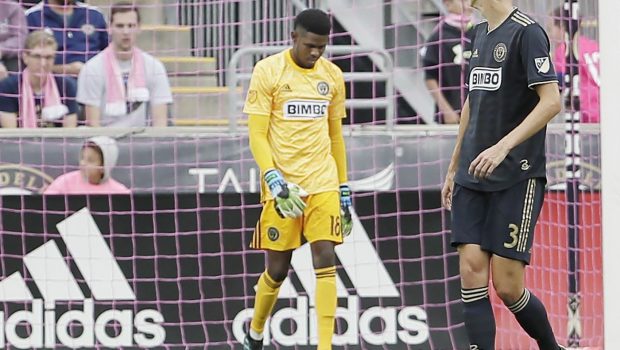 INTERNAL STRIFE ON UNION AT THE VERY WORST TIME OF THE SEASON!

“I knew if we lost tonight it would be, ‘Typical Union’,” Union coach Jim Curtin said after Sunday’s regular season-ending 2-1 loss to New York City FC. “I still see a team that is different. I see a team that put a lot into the nine months [of the regular season], set ourselves up to have our highest point total in the league, and I’m going to stand up for the players.”

As so it begins:

The backbiting on a team that has overperformed all year and now seems to be coming apart just as the playoffs are next.

In the case of the Union, it’s not surprising, since they have been a second-rate team for most of their 10 seasons in the MLS, until this season when they sat atop the MLS East for more of the season.

On Sunday, the looked lost in losing at home to NYCFC, and they have until Oct. 20 to prepare for the New York Red Bulls at home.

“Everything was [at], like, 50 percent,” midfielder Haris Medunjanin said of the Union’s effort against NYCFC as quoted in the Inky. “If you don’t play as disciplined as we always used to play, then every team can tear you apart. We need to learn from this, because in the playoffs, you don’t get chances. If you don’t score, you’re going to lose. It doesn’t matter against who you play.”

“Everyone needs to work. We cannot have two, three players chilling and doing nothing,” he said. “If one player in our team doesn’t do their job, we are a bad team. If we don’t give 100 percent every game, then any team can beat you, home or away.”

“That’s the lesson,” he said. “To fight for each other, to be disciplined, and when you do that, then you can beat any team.”

“The minority, 5% of all fan bases make the most negative noise, and the negative people get the loudest voice. If you’d like, you can continue to have that voice,” Curtin said. “Whatever your stats are, I can come up with other stats that would say that, you know, three of the last four years we were in the playoffs. Do we have to win a playoff game now? Yeah, we do. But you know, again, you can you can spin it however you’d like.”