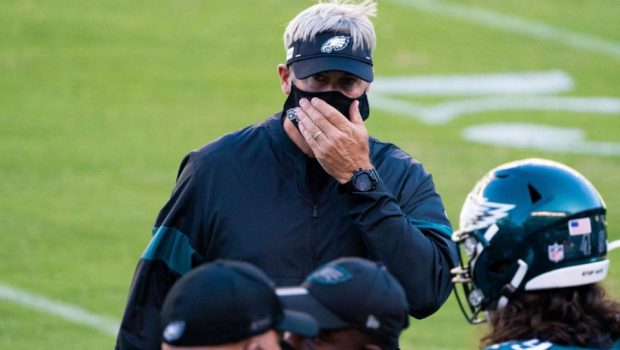 INSTEAD OF AXING PEDERSON, EAGLES SHOULD TRADE HIM FOR PICKS!

It looks like Eagles coach Doug Pederson may be on the way out after another meeting with owner Jeff Lurie.

But here’s a better idea:

Why don’t they trade him?

With the Jets needing a head coach and the Eagles looking for a change, Pederson could be the subject of a blockbuster trade.

Pro Football Talk yesterday reported that a franchise or two could be interested in trading compensation to Philly for the rights to Pederson:

In the current cycle, there’s buzz that one of the teams currently looking for a coach — the Jets, Jaguars, Lions, Falcons, Chargers, and Texans — could attempt to hire a current head coach with another team. The coach’s current team could end it all quickly by hanging up the phone. But it costs nothing to make the call, and it’s believed that at least one team may make the call to one of the teams that, at least for now, has a head coach.

That led some in the media to speculate that Pederson could be a trade target.

The Jets have two first-round picks, two third-round picks, and two fourth-round picks that could interest an Eagles team looking for talent.

In Pederson, the Jets would get a coach that players around the league know and respect as well as someone Joe Douglas can work well with.