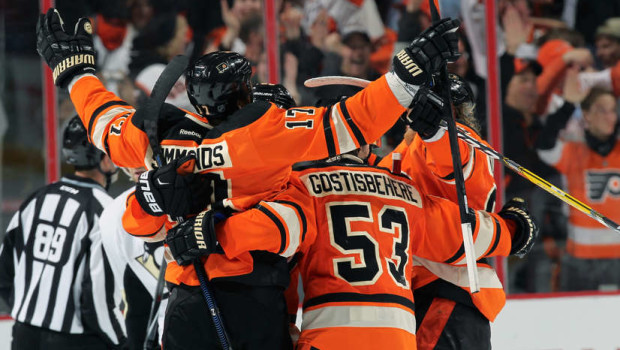 INSIDE THE FLYERS’ WILD RIDE TO A WILD CARD PLAYOFF SPOT!

Even at their lowest moments, the Flyers never felt their season was lost.

They capped a second-half turnaround with a 3-1 win against the Pittsburgh Penguins at Wells Fargo Center yesterday that clinched a berth in the Stanley Cup playoffs.

“From Day One we believed in the group,” Flyers coach Dave Hakstol said. “We believed in the character and the work ethic of the group. From there, it’s all the players in terms of those guys digging in, sticking together, pushing each other to be better, and in terms of the regular season, it culminates with a good win that puts us into the playoffs.”

Wayne Simmonds scored two goals, and Pierre-Edouard Bellemare had one for the Flyers (40-27-14).Steve Mason made 18 saves.

The win eliminated the Boston Bruins, who lost 6-1 to the Ottawa Senators, from playoff contention. The Flyers are the second wild card in the Eastern Conference and will play the Washington Capitals in the first round; they split four games this season.

“I think we played some really great hockey against them,” defenseman Shayne Gostisbehere said of Washington. “They’re the best team in the League for a reason; they’re very good. We have a good test on our hands there.”

Pittsburgh goaltender Matt Murray left the game with 2:35 left in the first period after a collision with forward Brayden Schenn. Jeff Zatkoff replaced Murray and made 22 saves. It was his first game since Feb. 20.

Coach Mike Sullivan said there would be an update on Murray’s health Monday.

The Penguins, who had clinched second place in the Metropolitan Division, played without captain Sidney Crosby and defenseman Kris Letang. Letang was a healthy scratch; Sullivan said Crosby was dealing with bumps and bruises and was held out for precautionary reasons.

The Flyers went into the final weekend of the regular season with a chance to return to the playoffs after missing them last season. They started the season 5-8-3 and were 15-15-7 after getting swept on a three-game trip to California that ended Jan. 2. Since then, they were 25-12-7, including 14-5-3 in their past 22 games.

“We feel like we’ve been a good team consistently since Christmastime, since the time we came back from the western road swing where we didn’t play very well,” Hakstol said.

The Flyers weren’t playing well at the start Saturday. The Penguins took a 1-0 lead on Bonino’s goal at 11:57 of the first period. Simmonds’ stretching redirection of a Voracek centering pass with 1:03 left in the first tied the game 1-1. It was the first shot Zatkoff faced after replacing Murray.

“I think our hands were a little too shaky [in the first period],” Simmonds said. “Like everyone had two cups of coffee too much. But we settled down, we figured it out, and we kept going and we stuck with our structure and we kept going and going. … We stuck to our systems. No matter if we were having a good game, bad game, we stuck with it and we just keep trying to improve on our systems. It worked.”

Simmonds’ second goal came when he got into the slot and Gostisbehere’s point shot hit him in the right arm and went past Zatkoff at 16:58 of the second period. It was his Flyers-best 32nd goal of the season and sixth in five games.

“He does the same things time and time again,” Hakstol said. “I think that’s what leads to success as a player. He didn’t start off the year the way he wanted to, he had some tough luck maybe the first few games, first month of the season. But he’s been a very consistent high-level player for us throughout the majority of the season.”

“All the weight came off your shoulders,” said Mason, who started his 12th straight game. “The guys fought hard all game, all season long to get to this point. To have that seal the deal there, was definitely a nice feeling to ride out the last 50 seconds.”

The Penguins will play either the New York Islanders or New York Rangers in the first round of the playoffs, which begin April 13. The Islanders play the Flyers at Barclays Center on Sunday.

“Get a few days here to practice and do some scouting,” Pittsburgh forward Chris Kunitz said. “I’m not sure who we’re playing. We’ll figure that out and scout out some guys for a way to be successful against whomever we’re playing.”