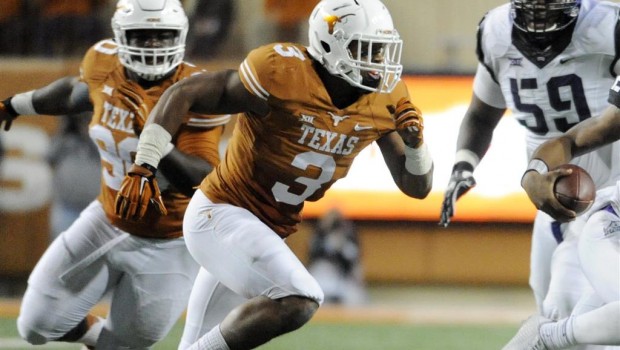 Eagles coach Chip Kelly got his man in the 3rd round of last night’s NFL draft — inside linebacker Jordan Hicks from Texas — and the immediate thought was:

What does this mean for incumbent Mychal Kendricks?

“We haven’t offered any players to any teams,” Kelly said. “But I understand that’s what makes sports great. There’s nothing to talk about, you talk about trades. It doesn’t bother me. I love it. I had to talk to some of the guys about it.”

Already on the roster is DeMeco Ryans, who was given a one-year contract extension; Kiko Alonso, who was acquired in the LeSean McCoy trade; Brad Jones, who was signed as a free agent, and Najee Goode.

“This was a guy we had ranked higher than anyone on the board,” Kelly said. “We had him in the second round. There wasn’t anyone even close to him at this point. He’s a three-down linebacker. We like that. We want three-down linebackers. That’s what Mychal and Kiko are.”

“He’s been OK,” Kelly said. “He was fine last year. Our doctors cleared him medically.”