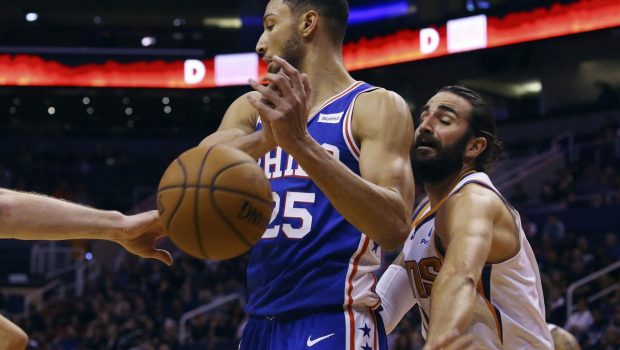 INSIDE SIXERS BENNY SIMMONS WORST GAME AS A PRO!

The Sixers lost their first game of the season last night in Phoenix 114-109, and Ben Simmons had the worst game of his three-year NBA career:

True, Philly was again without star center Joel Embiid, who sat out his second game because of his scrum last week with Minny’s Karl-Anthony Town.

Simmons did play his normal tough defense and he tied a career high with seven steals and looked alert as a team defender.

Yet he rarely applied pressure at the rim, looked tentative as a dribble-drive creator, lacked finishing touch and couldn’t contain Devin Booker when it mattered late.

The ball was largely taken out of his hands in the half court and while he set a number of good screens to spark open looks, six points on 2-of-8 shooting won’t cut it.