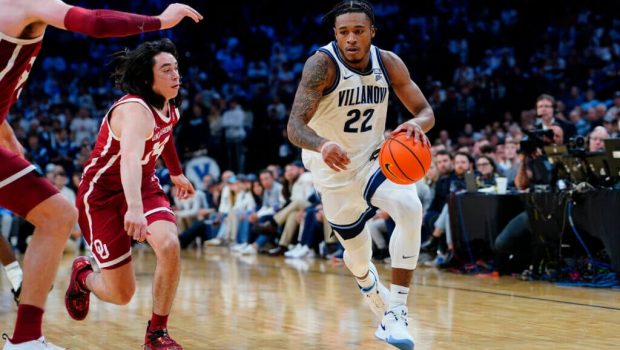 Villanova scored a big win yesterday, rallying past Oklahoma 70-66 at the Wells to improve to 3-5.

But the post-game talk was all about a Cat who many fans had never seen or heard of.

His collegiate career was delayed for seven weeks due to a broken thumb on his right (shooting) hand that required surgery and limited him to only a few days of practice in the final weeks was.

Whitmore isn’t just any freshman. He is one of the highest-ranked recruits to come to Villanova and is projected as a top-10 pick in the 2023 NBA Draft. He was a McDonald’s All-American, the Maryland Gatorade Player of the Year, and the MVP of the FIBA ​​U18 Americas Championship, which was won by Team USA.

Whitmore officially checked into the game with 14:18 to play in the first half, to a standing ovation. He received an even bigger reception when he made his first bucket, a 3-pointer from the corner with 4:42 remaining.

“He loved ‘Nova Nation,’” Whitmore said. “Since the beginning, he has been building me up, helping me. I just kept a good attitude and I’m very grateful for that.”

Whitmore’s biggest impact was on the defensive end where his length and athleticism caused Oklahoma problems when the Wildcats (3–5) switched to a smaller lineup. He was used on top of the 1-2-2 press.

Guard Caleb Daniels said, “I’m so proud of this kid, and it starts with the practices and everything he does off the court.” “He’s willing to fight and that’s unique for a freshman. Not many freshmen are like that and that’s what happens to all of our freshmen and it showed tonight. He had a great performance tonight. We’ve got him Picked up and to be honest, he’s a very balanced young man as a freshman and that’s something that not a lot of freshman have so I’m really proud of him on both ends of the floor.

Daniels finished with 22 points, a game-high of 15 in the second half. Eric Dixon added 12 points and Chris Arcidiacono added 10, but it was the defense that enabled the Wildcats to break Oklahoma’s six-game winning streak.

Whitmore was not on the court for the final stretch. He was on a one-minute ban and appeared off the bench after coming off the contest with 7:46 to play. But his influence was profound.

Neptune said, “I liked where Cam was.” “This guy hasn’t picked up a basketball and he hasn’t been able to shoot with his right hand for seven weeks. He hasn’t gone up and down, no contact, and again, he’s never played in college. He’s at this level. Never played, in an NBA arena, playing against what I think is a really good team. So what he just went through, 20 minutes, (it’s) mind-boggling.”