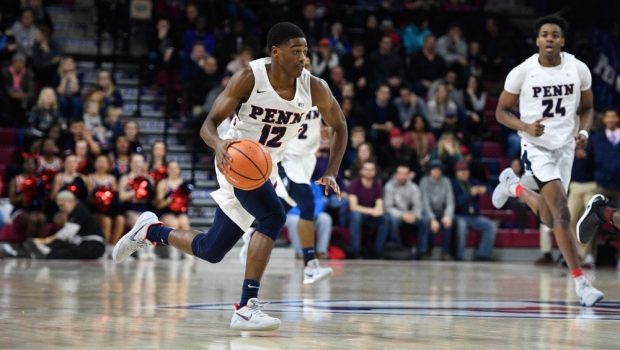 INJURIES CATCH UP WITH PENN, A 68-65 OT LOSER AT PRINCETON!

Sebastian Much’s two free throws put Princeton up 68-65 with 6.5 seconds left in overtime and Penn then missed twice as the time ran out as the Tigers won Ivy League opener.

Richmond Aririguzoh led Princeton (8-5, 1-0) with a career-high 20 points and Myles Stephens notched his sixth career double-double with 11 points and 16 rebounds.

Penn trailed by eight in the final five minutes of regulation before a Devon Goodman (above) 3-pointer capped an 11-2 run and they lead at 62-61 inside the final minute. Much made the second of a two-shot foul to tie with 39 seconds left and Princeton missed a last-second jumper, leading to overtime.

AJ Brodeur led the Quakers (10-5, 0-1) with 18 points and a career-best 15 rebounds. Goodman added 15 points, and Bryce Washington and Antonio Woods scored 11 each.

It was injury-depleted Penn’s second-straight overtime loss, having fallen 76-74 to Monmouth on Monday.