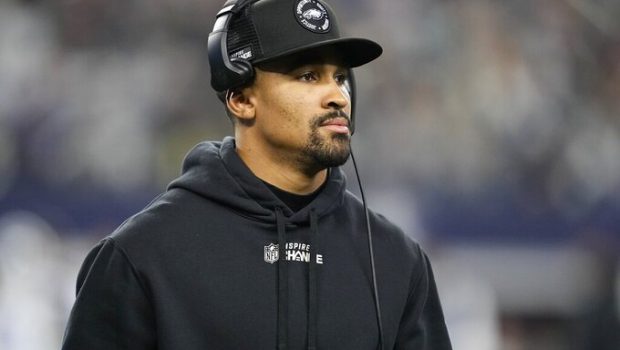 Minshew had the Eagles 19 yards from a potential winning touchdown in the final seconds, his desperation pass into the end zone on fourth-and-10 wasn’t anywhere near a receiver.

The NFL-leading Eagles (13-2) had two of their four turnovers in the final five minutes and missed a chance to clinch the NFC’s top seed in a matchup of playoff-bound division rivals.

One Philadelphia victory or loss by Dallas (11-4) in the final two games would wrap up home-field advantage throughout the NFC playoffs for the Eagles, whose five-game winning streak ended.

“We missed an opportunity,” Minshew said.

“You can’t turn the ball over four times. We stress turnovers all the time. That’s what has made us successful.”

Dallas was down 10-0 after Prescott’s third pass of the game — intended for wide-open tight end Dalton Schultz — was too low. Sweat made a leaping point-blank pick, and the defensive end easily ran through Prescott’s desperate attempt at a tackle.

Prescott has thrown an NFL-worst 11 interceptions since returning in Week 7 from a five-game absence with a broken thumb. He has a five-game interception streak in the same season for the first time.

“Guess I just misjudged his length. He made a great catch,” Prescott said. “I was chasing him down, like, ‘Is this happening again? Oh well. Let me get back on the field, let’s get this thing back rolling.’”

Prescott rallied the Cowboys in front before halftime, but they went down by 10 again in the second half.

The deficit was seven in the fourth quarter when T.Y. Hilton’s first catch in his Dallas debut came on a 52-yarder on third-and-30. It set up CeeDee Lamb’s second touchdown on a 7-yard pass for a 34-34 tie with 5:49 remaining.

Hilton took off on a go route down the Dallas sideline, surging past Darius Slay before Prescott hit him in stride.

“I can still play. If you don’t think I can play, then that’s on you,” said the 33-year-old Hilton, who spent 10 years with Indianapolis. “I don’t have to be fast. I can be slow, I can still get open. But I’m still fast.”

On the next possession, rookie cornerback DaRon Bland took the ball away from Philadelphia receiver Quez Watkins for Minshew’s second interception, leading to Maher’s 48-yard kick for a 37-34 lead.