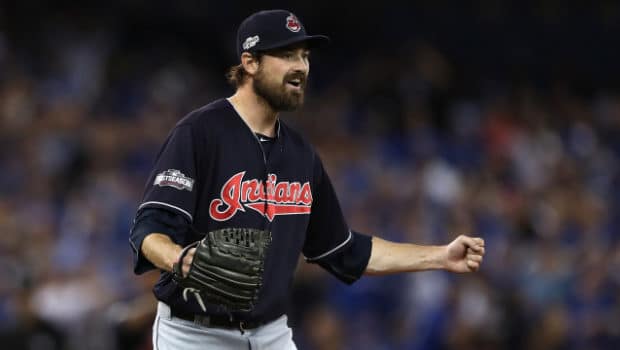 A bloody finger stemming from a freak injury forced the Indians’ Trevor Bauer out of the game in the first inning. The bullpen turned in an October performance for the ages. Slumping hitters awoke and delivered critical hits.

It all added up to an improbable 4-2 victory over the Blue Jays that gave the Indians a 3-0 edge in the American League Championship Series, one win away from reaching the World Series for the first time since 1997. Anchored by another overpowering showing by Andrew Miller, six relievers appeared for the Tribe, helping the team become the first in postseason history to win without having at least one pitcher record more than five outs.

* If necessary | All times listed ET

After Bauer took the hill four days after a drone accident left him with 10 stitches in his right pinkie, Cleveland’s worst-case scenario became a reality in the first inning, when the laceration opened and he began bleeding, a lot. Blue Jays manager John Gibbons pointed it out, and despite the efforts of Indians athletic trainer James Quinlan, Bauer was forced to exit the game after only two outs.

Following Bauer’s exit, the bullpen pieced together 8 1/3 innings of excellence. Miller closed it out, piling up three strikeouts in 1 1/3 frames to earn the save and build on his incredible October. The lefty now has an ALCS-record 13 strikeouts out of the bullpen for the Indians, who became the fifth team in history to open the postseason with a winning streak of at least six games. (The 2014 Royals started 8-0, and the ’07 Rockies started 7-0. Both lost the World Series.)