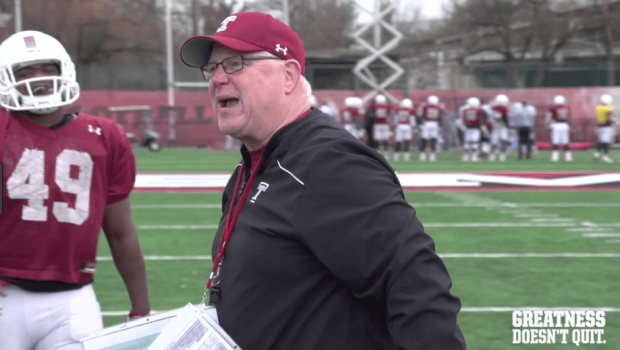 Don’t you dare tell Temple’s interim coach Ed Foley that the Independence Bowl is for also-rans!

Temple finished 8-4 this season and the Owls were rewarded with a trip to Shreveport, Louisiana for the Independence Bowl.

The coach who led the team to its fourth bowl game in as many years — Geoff Collins — was hired as Georgia Tech’s next head coach.

In his place is interim head coach Foley (who also was interim coach for the Military Bowl in 2016 following Matt Rhule’s departure for Baylor).

Foley is no Nick Saban. That’s pretty obvious based on his zero career wins as an FBS head coach (Temple lost that 2016 Military Bowl to Wake Forest). But Foley’s opinion on the city of Shreveport and the Independence Bowl also differs wildly from that of the Alabama head coach.

And here’s how Saban felt about the Independence Bowl back during his first season at Alabama in 2007, via Yahoo Sports: “We’re never f’ing coming here again.”