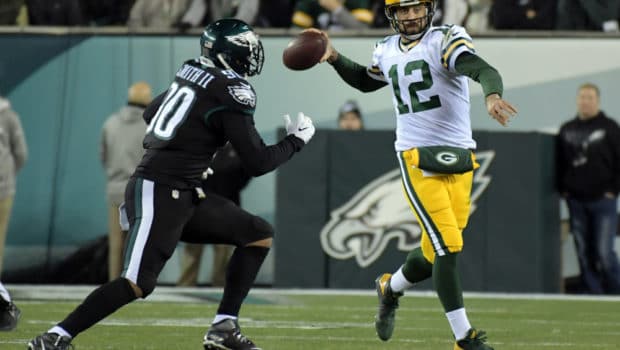 INDEFENSIBLE! AGAINST PACK AND RODGERS, EAGLES D GETS AN F

Well, so much for the notion that the Eagles’ defense can keep the Birds in every game, and it’s up to the offense to win it.

In last night’s disappointing 27-14 loss to the Green Bay Packers at the Linc, the D deserved an F.

Quarterback Aaron Rodgers torched the Eagles defense, completing 30-of-39 passes for 313 yards and two touchdowns. He led the Packers to a much needed victory.

The Eagles defensive line was fooled by the Green Bay’s mobile quarterback all night:

No sacks on Rodgers and only two hits the entire game.

Rodgers utilized short routes and released the ball before Philly’s pass rushers could get to him. Davante Adams was often on the other side of Rodgers’ quick throws.

The Eagles secondary had no answer for Adams and the defense as a whole had couldn’t stop Rodgers. The veteran quarterback’s ability to extend plays killed the Birds.

Rodgers apparently tweaked his hamstring, but had arguably his best game of the season. He was very efficient, with no turnovers and just nine incompletions.

Jordy Nelson had the most receptions for the Packers. He had eight catches for 91 yards and was instrumental in moving the chains.

The Packers were so good passing the ball that they didn’t need to run. They had 239 more passing yards than rushing yards.