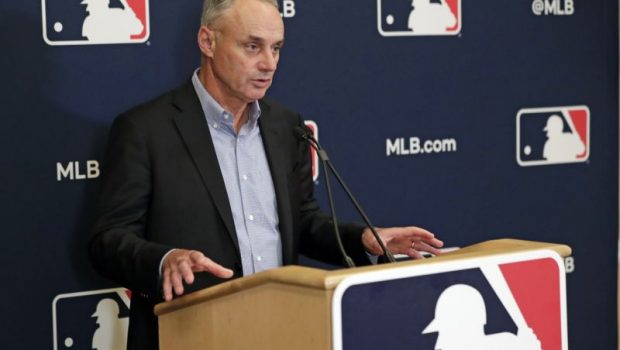 INCOMPETENT MLB COMMISH ADMITS HE AND THE UNION SCREWED UP!

Rob Manfred knows many fans are pissed off by the financial fight between Major League Baseball and the players’ association during a pandemic.

“We need to get back on the field, and we need to in a less-charged environment start to have conversations about how we — and the we in that sentence is the commissioner’s office, my staff, the clubs and the MLBPA and the players — can be better going forward,” he told The Associated Press. “We owe it to our fans to be better than we’ve been the last three months.”

Spring training was cut short by the coronavirus on March 12. The sides reached an initial agreement on March 26, which was to have been opening day. That deal called for players to receive prorated salaries, get $170 million in advances and receive a guarantee of service time in the event no games were played this year.

When it became clear the only way to start the season was to play in empty ballparks, the sides battled publicly over what the agreement meant.

Owners said players needed to accept additional cuts and proposed an 82-game schedule starting around the Fourth of July. Players argued they shouldn’t have to accept less than the original deal called for. But that agreement didn’t bind Manfred to start the season with no gate revenue.

Vitriol rose in baseball’s worst infighting since the 7 1/2-month strike of 1994-95 wiped out the World Series for the first time in nine decades. The union rejected the last proposal for a financial agreement, then finished protocols to play in the pandemic on Tuesday and promised players will start reporting July 1 for a 60-game season scheduled to start July 23 or 24, MLB’s briefest since 1878.

“The focus here was on a day’s wage for a day’s worth of work,” union head Tony Clark said during a separate interview with the AP. “That’s what we believed was fair, and that’s why we maintained the position that we did.”

In the view of many, the outcome left losers on both sides. MLB already has experienced four straight seasons of declining average attendance.

“In my opinion, it’s a damn shame that the ramifications of this are going to be felt for a long time,” said Cincinnati catcher Tucker Barnhart, the Reds’ player representative. “I grew up a baseball fan, I’m a baseball fan first, and I think it sucks that it’s had to go on the way that it is. But I hope that getting out and playing will kind of mask some of the bruises that the game as a whole has taken over the last few months.”

MLB intends to start without fans in ballparks, even in places where government and medical officials allow some spectators.

“I think we need to get on the ground running and get comfortable that we can play games in empty stadiums safely before we move forward fans,” Manfred said. “My patience in that regard is in part based on the fact that there are so many different situations. Some places there looks like there’s no prospect, other places they’re more aggressive. I think we need to be patient and even where we have the option, we need to make sure that we know exactly what we’re doing before we jump into it.”

Owners decided to go ahead with a season despite the threat of a grievance from the union, which has claimed MLB did not adhere to provisions in the March 26 agreement requiring the longest schedule economically feasible. That deal also included additional provisions such as fans being allowed into all 30 ballparks and no relevant travel restrictions.

“Every time you make a decision like this, you balance risk and reward,” Manfred said. “I think the clubs felt that the most important objective was to get the game back on the field, and because that was the most important objective, they were prepared to bear whatever risk was associated with a grievance that is — let me be really clear about this: utterly without merit.”

Clark would not directly respond when asked whether lasting damage had been inflicted.

“I think there is an opportunity to move forward, move our game forward,” he said. “And as it relates to the atmosphere in general, the lines of communication remain open, and we’ll count that as a positive in the days ahead. ”

Because there was no financial agreement, the postseason is slated to remain at 10 teams rather than expand to 16. MLB could attempt to make another proposal for a larger postseason.

“I would simply say that if there’s interest to discuss something, I’ll be available to discuss it,” Clark said.

He maintained the decision by the executive board to reject the last plan Monday was not a choice of a grievance over a deal.

“The grievance was not the focus, never has been the focus,” he said. “The goal, and that’s why we sent across proposals, was to attempt to find common ground on an agreement. We simply were unable to do so.”

He would not address last week’s one-on-one meeting in Scottsdale, Arizona, which Manfred said produced a framework for a deal and Clark called merely a management proposal. Manfred has maintained Clark promised to try to persuade players to accept it, then said a few hours later he could not get their support.

“Rob can focus on his side and I’ll focus on mine,” Clark said.

Clark defended the union’s decision not to accept MLB’s offer to eliminate free-agent compensation, which could hurt several players’ value next offseason.

“It was associated with significant salary cuts,” he said.

As baseball prepares to resume, Manfred and his staff have watched European soccer leagues carry on with closed-door matches.

“We normally think about our product as two products, the live product and the broadcast product,” he said. “Given our current situation, I think that the goal is to make the broadcast product, because it’s the only one we have, as entertaining for fans as we possibly can. We’re working closely with the RSNs and our national partners in an effort to give the game a zeal that will be satisfying to our fans without having the normal crowd noise and excitement that’s created by that environment.”

“We’re still making decisions about that,” he said. “I like what they’ve done in England and Germany because I think it’s innovative and I think that the current situation calls for us to try some things that are different.”