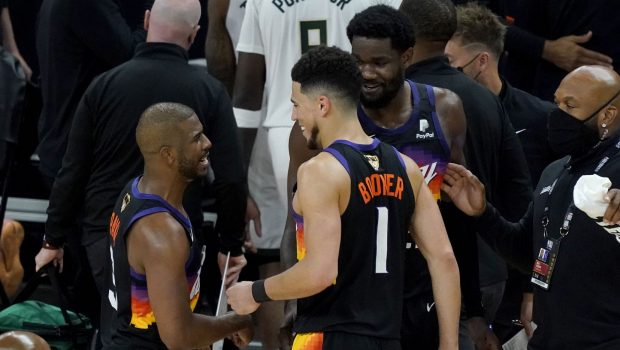 IN GAME 1, IT WAS SUNS CP3 ALL THE WAY, BUCKS NOTHING!

Chris Paul, the 36-year-old future Hall of Fame point guard, scored 16 of his game-high 32 points on seven shots in a third quarter that blew open what to that point was an evenly matched series opener, and his Phoenix Suns rolled to a 118-105 win over the Milwaukee Bucks in game 1 of the NBA Finals.

“He’s the guy when I was a kid, looking up, seeing him, knowing he was going to be a Hall of Famer, wishing, ‘Dang, CP been in the league, he deserves a ring,’ and now I’m in this seat where I have an opportunity to help him get one, and it’s amazing seeing him doing this.”

The Suns host the Bucks again Thursday for Game 2 at 9 p.m. ET on ABC.