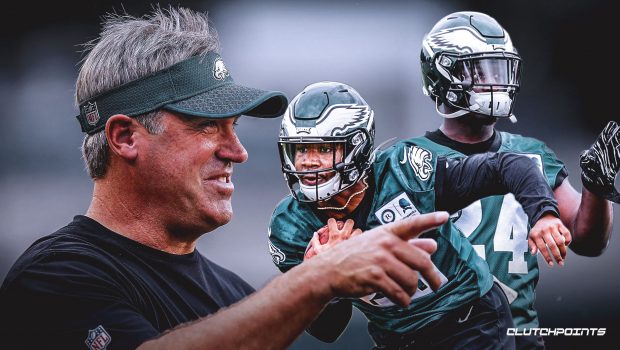 IN EAGLES-JETS, HOWARD, SANDERS SHOULD KEEP POUNDING THE ROCK!

The Eagles running game got off the ground last Thursday night against the Packers, and with the woeful Jets coming up Sunday at the MetLife there’s no reason for Doug Pederson not to keep calling Jordan Howard’s and Miles Sanders’ numbers.

Any chance the New York Jets have of beginning to develop a positive offensive identity on Sunday likely depends on the spleen of quarterback Sam Darnold.

The Eagles are coming off a nine-day “mini-bye” after Howard and Sanders led them to a 34-27 win at Green Bay. The Jets had an actual and much-needed open date following a 30-14 loss to the New England Patriots on Sept. 22.

The win over the Packers snapped a two-game losing streak for the Eagles while also establishing Howard and Sanders as a 1-2 punch worthy of complementing quarterback Carson Wentz, who threw three touchdowns despite completing just 16 passes.

Howard (87 yards) and Sanders (72) led a rushing attack that produced 176 yards, the most for the Eagles since a 215-yard outburst against the Dallas Cowboys on Nov. 19, 2017. Sanders also had a 67-yard kickoff return that led to Wentz’s touchdown pass to Alshon Jeffery.

Any victory would feel enormous for the Jets, whose once-promising outlook on the season has spiraled downhill in a hurry. Darnold (mononucleosis) missed the previous two games, a span in which New York scored just 17 points combined against the Patriots and Cleveland Browns.

The touchdowns against the Patriots came via Arthur Maulet’s fumble recovery of a muffed punt in the end zone and a 61-yard Jamal Adams interception return, meaning the Jets have produced three offensive points in 25 series with Trevor Siemian and Luke Falk under center. Siemian is out for the season with an ankle injury suffered against the Browns, so if Darnold can’t go Sunday, Falk will draw his second start.

Head coach Adam Gase sounded more optimistic Wednesday regarding Darnold’s status than he did Monday. Darnold is expected to undergo more testing Friday to determine if he will be cleared for contact. Like most mono patients, Darnold has an enlarged spleen, which could rupture if he’s hit in the midsection.

“I like our odds, better than what they’ve been,” Gase said. “I like the fact that things have looked and progressed in the right direction. But I don’t know what that 5 percent is. There’s some gray still there.”

Darnold was listed as a limited participant in practice. The most notable absence from Jets practice Wednesday was linebacker C.J. Mosley (groin), who is expected to miss a third straight game.

Veteran Eagles wide receiver DeSean Jackson (abdomen) is also expected to sit out a third consecutive game after missing practice Wednesday. Cornerback Avonte Maddox (neck, concussion), who was injured in the fourth quarter of the win against the Packers, will also be out Sunday.

Linebacker Duke Riley is expected to make his Eagles debut on special teams after he was acquired Monday from the Atlanta Falcons.