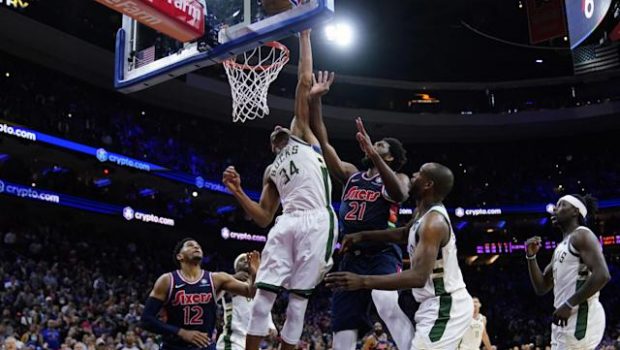 IN CRUNCH TIME, BUCKS MVP WAS TOO MUCH FOR SIXERS MVP!

Giannis Antetokounmpo had 40 points and a game-deciding block of Joel Embiid in the final seconds to lead the Milwaukee Bucks to a 118-116 victory over the Sixers.

Khris Middleton added 22 points and Jrue Holiday had 18 for the Bucks, who pulled within a half-game of idle Miami for first place in the East.

Milwaukee was clinging to a two-point lead when Antetokounmpo swatted away Embiid’s put-back attempt with 1.6 seconds left.

“We count on him to make big plays,” Middleton said. “We don’t expect him to make that block, but when he does, we’re not surprised.”

Said Holiday, “Giannis just being Giannis. Made a great play and saved the game.”

James Harden had 32 points and nine rebounds for the 76ers, and Embiid recovered from a slow start and finished with 29 points, 14 rebounds and seven assists. Philadelphia dropped 1½ behind the Heat in the conference.

“Couple mistakes defensively and they made us pay for it,” Harden said.

Every time it looked as if Milwaukee was going to pull away, the 76ers answered with a 3 to stay close. Embiid’s 3-pointer with 49.8 seconds left pulled Philadelphia within 117-116. After a turnover by Brook Lopez, Philadelphia had a chance to go in front, but Embiid missed a 14-footer following a timeout.

Antetokounmpo was fouled on the ensuing possession and made the first of two free throws to put the Bucks up 118-116 with 13.2 seconds to play. After another 76ers timeout, Harden’s step-back 3 was long. Embiid grabbed the rebound and looked primed to tie it with an easy layup, but Antetokounmpo blocked it. The officials originally ruled that it was goaltending, tying the score, but it was overturned after a video review.

“Just let my instincts play,” Antetokounmpo said. “I just tried to jump as high as I can and make a play.”

The 76ers controlled the ensuing jump ball but ran out of time for a shot.