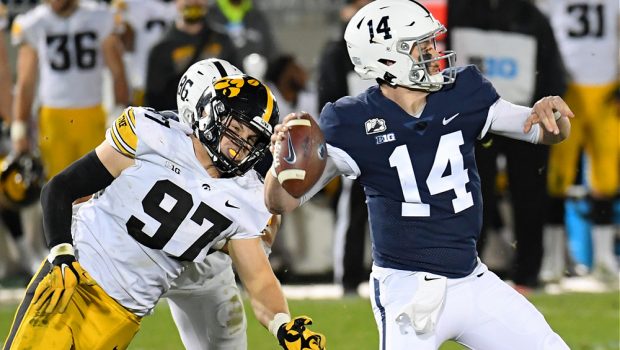 October 9 is a bit early for the college football game of the year.

But here you go:

The Hawkeyes have home-field advantage and the crowd on their side. And even though it is not a night game, heading to Nile Kinnick Stadium to take on what could be the best Hawkeye team since 2015 would be tough for most teams.

The Hawkeyes have the best turnover margin in the country at +12 (16 gained, four lost), while Penn State has half that at +6 (nine gained, three lost). Only Georgia has a better EPA allowed per play mark than Iowa does (-0.357).

Iowa quarterback Spencer Petras has done a decent job of taking care of the ball, throwing just two turnover-worthy passes on 145 attempts so far, but Iowa averages only 4.8 yards per play on just under 69 plays per game and will need to find a way to exploit any possible advantage against the Penn State defense.

For the Nittany Lions, there is no doubt that the defense is a solid unit, but games against the likes of Wisconsin, Ball State, Villanova and Indiana do not have them truly tested.

Quarterback Sean Clifford has kept his number of turnover-worthy plays down to only two and has shown a willingness to test the deep ball. Having Jahan Dotson makes life easier for Clifford in the passing game, as Dotson leads the Big Ten in receptions (35) and receiving touchdowns (6) and opens up plays for Parker Washington and KeAndre Lambert-Smith, the other receivers in this offense.

The game is set to be a defensive battle, but Iowa’s defense is on another level. The spread is on the right side of a key number of three that PFF Greenline believes should be closer to -3.5 than the market -2.5.