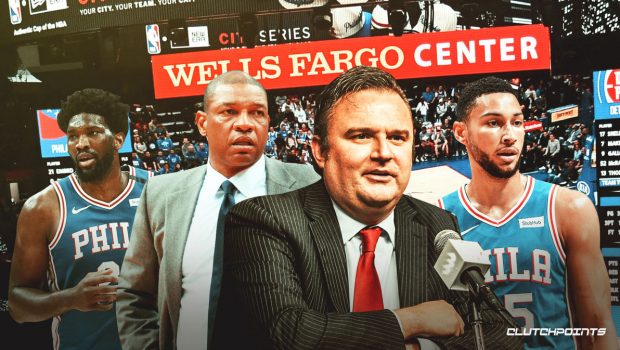 IN JUST 3 DAYS, DARYL MOREY HAS MADE SIXERS A CONTENDER AGAIN!

Remember when all the hand-wringers and pearls-clutchers in the local lame-ass media were telling Philly that the Sixers were rudderless and that owner Josh Harris and GM Elton Brand were out to lunch?

Then Nov. 2 happened and the Sixers hired Daryl Morey.

And since then Morey has already addressed an area that he clearly wanted to upgrade: the team’s perimeter shooting.

On Thursday, the 76ers worked out a trade for Seth Curry after moving toward a deal for Danny Green. The two are veteran guards who figure to help the team space the floor around Ben Simmons and Joel Embiid.

There is no doubt that Simmons and Embiid are ascendant stars. But they have not quite figured out how to put it all together when it matters most, a problem that was especially glaring when the 76ers got swept by the Boston Celtics in the first round of the playoffs a couple of months ago.

Perhaps playing with some teammates who can make 3-pointers will help. Last season, the 76ers ranked just 22nd in the league in 3-point attempts.

To that end, Morey made a couple of bold moves. First, he agreed to send Al Horford to the Thunder as a part of a package for Green, according to ESPN. Hobbled by a hip injury last season with the Los Angeles Lakers, Green was largely ineffective in the postseason — but when healthy, he is a reliable perimeter threat.

Later, Morey sent Josh Richardson and the rights to the No. 36 draft pick, Tyler Bey from the University of Colorado, to the Dallas Mavericks for Curry, who averaged 12.4 points a game last season while shooting a career-best 45.2 percent from 3-point range. Curry, whose older brother, Stephen, stars for the Warriors, also happens to be the son-in-law of 76ers Coach Doc Rivers.

Where are all the hand-ringers now?