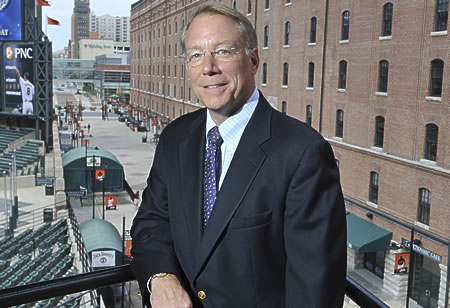 The Phillies introduced Andy MacPhail today as their new president, with his job beginning when the 2015 season ends.

MacPhail, 62, will serve as a special assistant to Gillick in the front office until then.

Here are some bullet points about MacPhail:

• MacPhail last worked for the Baltimore Orioles as president of baseball operations from 2007 to 2011 (above).

• He was responsible for bringing in key pieces such as Adam Jones, Chris Davis and J.J. Hardy, who all helped the Orioles reach the playoffs in 2012 and 2014. MacPhail hasn’t worked in a major-league front office since 2011.

• Prior to joining the Orioles, MacPhail served as the president of the Chicago Cubs from 1994 to 2006.

• When the Twins hired him as their new general manager in 1985, MacPhail (then 32) became the youngest GM in the majors at the time.

• His father, Lee, and his grandfather, Larry, are both Hall of Fame baseball executives.

* He began his baseball career as a Class-A business manager in the Cubs organization.

• He was named Major League Executive of the Year by The Sporting News in 1991.

• MacPhail had been at the top of the Phillies’ list for a while. Gillick alluded that his successor would be eased into the role:

“It’s sort of like what they do at private schools,” Gillick told the Philadelphia Inquirer. “They hire a headmaster a year ahead of time. I’m working with ownership and we’ve got some people under consideration. I think probably it’s going to happen somewhere in the not-too-distant future.”

• The Phillies are currently the worst team in baseball and Ryne Sandberg resigned as manager last Friday.