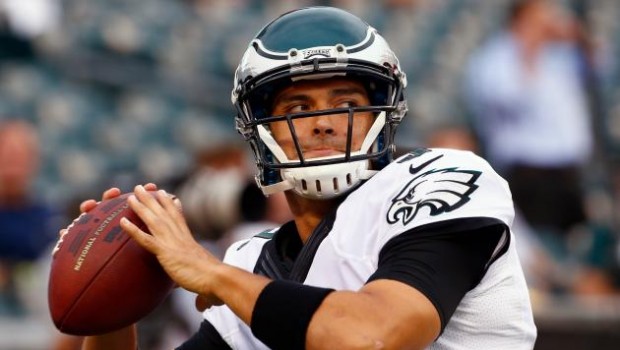 IMAGINING SANCHEZ BACK IN A NEW YORK JET UNI NEXT SEASON

Mark Sanchez is a free agent after this season, and the Jets will likely be in the market for a starting quarterback again. Stranger things than a Sanchez-Jets reunion happen all the time in the NFL. Like Sanchez reviving his career with the Eagles, for instance.

It is only two mornings after the Eagles’ 45-21 drubbing of Carolina on Monday Night Football, which highlighted Mark Sanchez’s admirable performance at quarterback.

So, it may be a bit early to throw cold water on the future.

But Bart Hubbach of the New York Post has constructed a scenario in which Sanchez makes his way back to the Jets:

It hasn’t even been two full games, but Captain Buttfumble already looks like The One Who Got Away instead.

As if it weren’t already a federal disaster area, the sight of Mark Sanchez leading the Eagles up and down the field Monday night in a 45-21 rout of the hapless Panthers had to feel like a little more salt in the open wound that is the Jets’ 2014 season.

The franchise punching bag in New York is playing like a franchise quarterback for Philadelphia, turning his first start since December 2012 into his second straight impressive performance in place of the injured Nick Foles.

Picking up where he left off in a victory over the Texans a week ago, Sanchez once again looked right at home in Chip Kelly’s fast-break offense while completing 20-of-37 passes for 332 yards and two touchdowns with — this is not a misprint — no interceptions.

Yes, in a prime-time matchup that featured former No. 1 overall pick (and NFL Rookie of the Year) Cam Newton, Sanchez was by far the best quarterback on the field.

Let that sink in for a moment, Jets fans.

“Sanchize” might have been used ironically while Sanchez was piling up interceptions in 2011 and 2012 and running into Brandon Moore’s backside, but the nickname is no joke in his stint with the Eagles.

With a quarterback-friendly scheme that plays to all of his strengths, Sanchez is looking like the guy who took the Jets to back-to-back AFC Championship games and beat Peyton Manning and Tom Brady on the road in successive playoff games.

Sanchez’s defenders when he was in New York — admittedly a group small enough to meet in a broom closet — always contended he was a victim of the terrible supporting cast the Jets gave him his final two seasons.

They had a point, too. Joe Montana would have struggled to do much with Chaz Schilens, Clyde Gates and Konrad Rueland as targets.

Weapons aren’t a concern in Philly, though, and Sanchez made full use of Rookie of the Year candidate Jordan Matthews, Jeremy Maclin and the rest of the Eagles’ scary array of targets once again.

Sanchez completed passes to eight different receivers Monday night, which is roughly the same number of competent receivers he had in five years combined with the Jets.

Sanchez said after his boffo relief effort last week that he considers the Eagles “a perfect fit” because Kelly’s offense is so balanced, so fast and doesn’t require a lot of thinking from the quarterback.

These aren’t the Brian Schottenheimer Jets that had Sanchez dropping back and not throwing enough on the run, where he excels. Nor is there a Tim Tebow sideshow to put seeds of doubt in his head.

As a result, Sanchez has flourished. He looked good even on plays Monday night that called for him to survey the field, connecting on throws of 33, 29 and 17 yards.

Sanchez looks so good, in fact, the locals are starting to wonder if Foles — who was inconsistent before his collarbone injury — can even get the starting job back after his expected return in two months.

Talk about a change of fortune.

About the only thing that could make this worse for Rex Ryan (the one who got Sanchez injured by playing him in the fourth quarter of a preseason game) and Jets GM John Idzik (the one who cut Sanchez last spring) is if he goes on to lead the Eagles to the Super Bowl.

Then again, Sanchez is a free agent after this season, and the Jets will likely be in the market for a starting quarterback again.

Stranger things than a Sanchez-Jets reunion happen all the time in the NFL. Like Sanchez reviving his career, for instance.