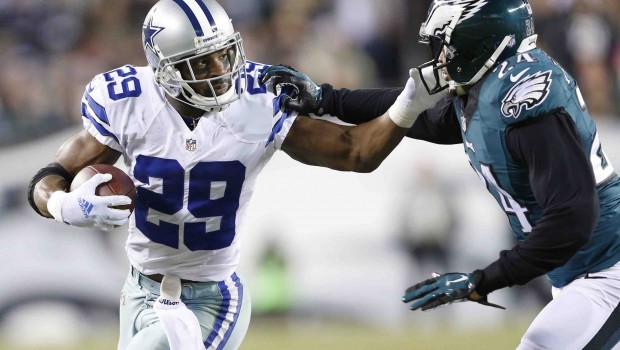 With about $50 million in cap space, how will Supreme Leader Chip Kelly choose to spend it?

The Eagles can sign anyone they want in free agency. Ndamukong Suh? The Eagles can comfortably give him a hefty signing bonus and an enormous guaranteed first-year base salary without having to corrupt their cap in years to come. Byron Maxwell might as well pack his bags now. Devin McCourty is in play. And this makes Jeremy Maclin easier to re-sign if the Eagles are interested. If you can dream it, the Eagles can do it.

The most interesting options, though, are a pair of offensive weapons Kelly might find to his liking. McCoy’s impending departure means the top running back on Philadelphia’s roster will be Chris Polk, with Darren Sproles limited to a situational role. Could the Eagles be interested in going after DeMarco Murray, a move that would weaken their division rivals in Dallas while giving Kelly a more consistent back who was fourth in the league in Success Rate last season? Or could the Eagles go after 24-year-old Packers star Randall Cobb, whose versatility could allow Kelly to line him up anywhere on the field as a mismatch?

There are reasons to argue against both options; Murray is coming off a year of overuse in Dallas, and the 5-foot-10 Cobb is hardly the sort of big, physical receiver Kelly seems to favor when he’s making the personnel calls. But it’s clear that part of this trade revolves around what the Eagles do with the cap space they’ve cleared out. McCoy for Alonso is curious. McCoy for Alonso and Cobb? That’s a lot more appealing if you’re an Eagles fan.