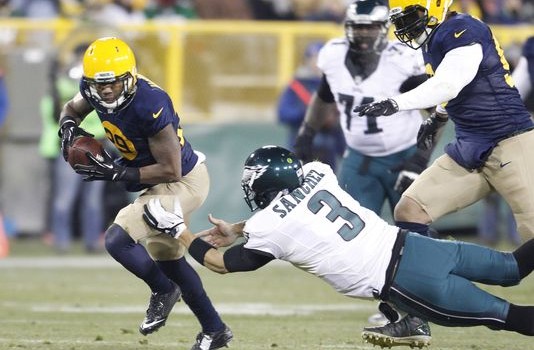 NO IFS, ANDS OR BUTTS — SANCHEZ' FUMBLE WAS HARD TO WATCH

Eagles quarterback Mark Sanchez struggled throughout the game in the Eagles’ 53-20 loss to the Packers, and as you can see in the below video, his fumble on a high snap was followed by this attempt to pick it up — an attempt that didn’t go so well. Casey Hayward (photo above) picked it up and ran in for the score.

The play had fans on Twitter reminiscing of Sanchez’s famous “Butt Fumble” during his time with the New York Jets, and with two interceptions on Sunday, he looked a lot like the quarterback he did with his previous career.