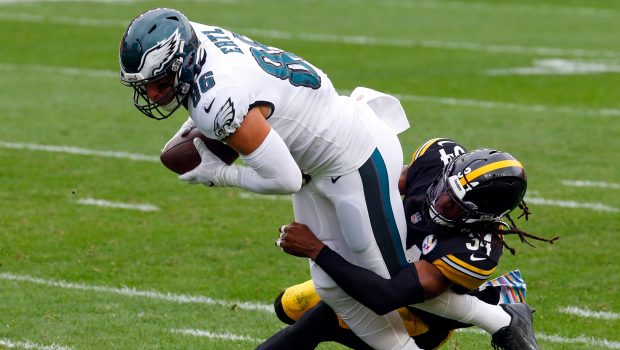 THE WAY ZACH ERTZ IS PLAYING, EAGLES SHOULD LET HIM WALK!

Eagles Zach Ertz came into this season considered to be an elite tight end.

But he has played this season’s first six games like he has lost his mojo.

His frustration by the lack of progress on a new contract has been well known, including a public shouting match with big boss Howie Roseman.

But the real mystery is his once-magical chemistry with quarterback Carson Wentz.

There were at least two occasions in yesterday’s loss at Pittsburgh when Ertz threw up his arms at Wentz passes that sailed over his head. There was also the time Wentz missed Ertz badly, and the ball was intercepted by Steven Nelson.

Ertz, coming off three straight Pro Bowl seasons, has just 20 catches for 145 yards this season. Over the last two games, Ertz has just 5 catches for 15 yards.

Dallas Goedert, the Eagles’ other tight end, is on injured reserve, leaving Ertz as the receiver that opponents focus on.

“They give him a lot of respect,” Pederson said.