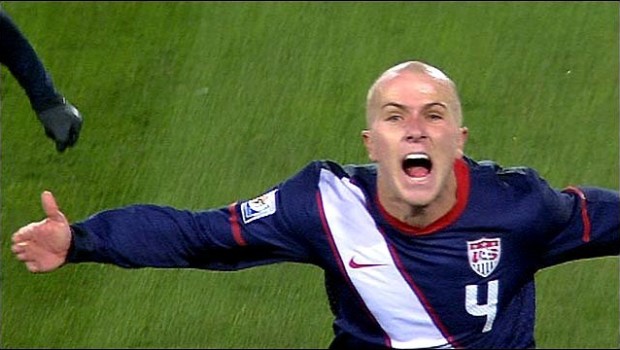 IF THE U. S. GETS PAST GHANA ON MONDAY …

… what are our real chances to get out of the Group of Death?

So, does the United States stand even a puncher’s chance of surviving what is considered the toughest group in the World Cup?

When the draw for the 2014 FIFA World Cup was announced last December, the U.S. men’s national team became the butt if jokes about the impossibility of its mission.

The good fortune that accompanied the 2010 draw completely abandoned them this time around, leading to a murderers’ row of opponents in Ghana, Portugal and Germany.

Since then, most observers are picking the U.S. to depart after three games, and it’s purely down to the strength of the opponents.

“The U.S. may play an exceptional World Cup, and it still might not be good enough to get past Portugal, Germany or even Ghana,” ESPN television analyst and former Venezuela international Alejandro Moreno said.

In this instance, the luck meter that was reading empty following the draw seems to be creeping back in the Americans’ direction. Ghana forward Majeed Waris is dealing with a quadriceps injury. Marco Reus, Germany’s most in-form attacker over the past few months, is out with torn ankle ligaments. Portugal’s Cristiano Ronaldo is battling patellar tendinosis, while teammates Raul Meireles and Pepe have been dealing with injuries, as well, though all three played in Tuesday’s 5-1 rout of Ireland.

These are the kind of ingredients that lead to the underperformance of a presumed favorite, which will need to happen for the U.S. to advance.

“I’m not saying the U.S. is going to get out of the group, but the odds are slowly turning here,” ESPN television analyst and former U.S. international forward Taylor Twellman said.

The best way to manufacture luck is for every player to perform to his maximum, but there are some key players upon whom the U.S. will rely heavily. Tim Howard will need to be immense in goal. Michael Bradley will need to excel — as he so often does — on both sides of the ball. Jozy Altidore will need to be a beast with his back to goal, and the skill and trickery of Clint Dempsey must be at an otherworldly level. Oh, and the latter two will need to finish, something a U.S. forward hasn’t done at a World Cup since 2002.

“Every half you’re going to get two to three good looks, and you have to score one of those,” former U.S. international Jimmy Conrad said. “If you don’t do that, you’ll be watching the knockout stage at home.”

Center backs Geoff Cameron and Matt Besler, both of whom will be experiencing their first World Cup, will need to get up to speed quickly, as well, although the vastly experienced Howard will do everything he can to help in this regard.

“I think Cameron and Besler are better than we’re giving them credit for, and they’re very good,” former U.S. international and current Fox Soccer analyst Eric Wynalda said. “They’re going to be just fine in this World Cup. And Howard is one of the best goalkeepers in the world. I think all this negativity is giving them motivation.”