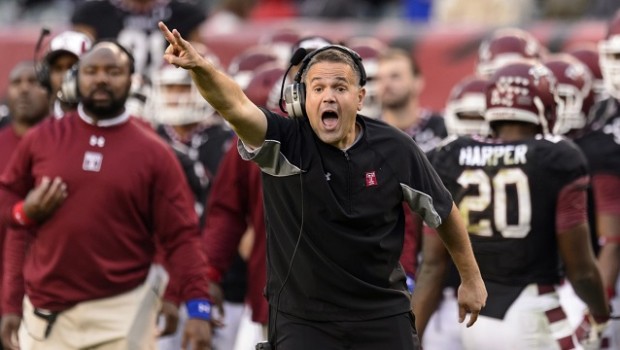 Temple has made our town a college football epicenter this weekend.

The 21-ranked Owls’ coach, Matt Rhule (above), came from the New York Giants, where he was the assistant offensive line coach. The quarterback, P.J. Walker, was the 1,597th best prospect nationally, according to 247Sports. The fullback, Nick Sharga, is also a backup linebacker. Who knew the that linebacker Tyler Matakevich is the nation’s career tackles leader?

No. 9 Notre Dame is superior athletically. But this is college football and that doesn’t always matter.

This is the first time a ranked Temple has played a ranked opponent. Ever. The last time the Owls won a home game as a ranked team was 74 years ago.

Temple, sixth among Group of Five schools in time of possession, will attempt to play keep away with the Irish. The Owls’ defense will try to run down Irish quarterback Deshone Kizer with converted linebacker Nate D. Smith (6.5 sacks).

Temple will look to prove we’ve all been sleeping on a missing angle before a sold-out Lincoln Financial Field — also home of the Eagles. How soon until Chip Kelly has to deny interest in the Owls’ job?