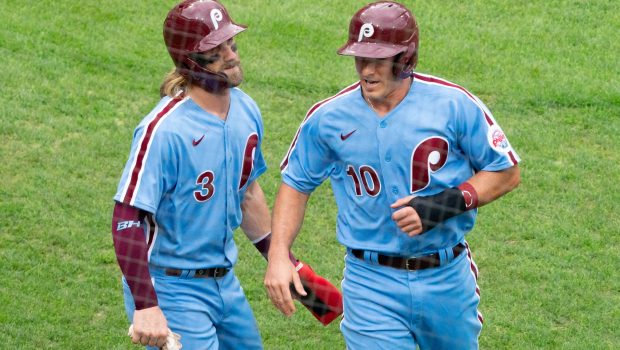 And, for the second time since he signed with the Phillies in March 2019, aced out of a playoff spot.

So he was very willing to shard his advice for the Phils front office after yesterday’s 5-0 loss to the Rays that ended the Phils season:

“J.T. Realmuto needs to be our catcher next year,” Harper said after the loss.

“Plain and simple. He’s the best catcher in baseball. He’s the best-hitting catcher in baseball. Our guys love to throw to him — if that’s (Zack) Wheeler, if that’s (Aaron) Nola, if that’s anybody. Anybody that’s the best at their position — hitting and fielding — needs to be signed, and that is J.T. Realmuto. I don’t think that should even be a question. There’s going to be two teams or three teams in the NL East who are going to go after that guy, and if that happens, I mean, that’s going to be tough to swallow for us.”

The decision to re-sign Realmuto is John Middleton’s; the managing partner said as much almost a year ago when the Phillies shifted the organization’s course by firing Gabe Kapler.

“The decision about a manager is much more directly connected to the strategic achievement of winning a World Series,” Middleton said Oct. 10, 2019, “just like signing Bryce Harper, just like signing J.T. Realmuto are much more connected and have a stronger impact on that.

“So when you get toward an impasse on those kinds of decisions, the CEO not only has the authority to step in, the CEO has the responsibility and the obligation to step in. And you’re always weighing how strongly I feel about my decision and how confident I am in my decision versus the other people who are sitting around the room.”

“I think the bullpen is made from within,” Harper said. “Not all teams go out and spend a million bajillion dollars on bullpens. You can’t do it. You can’t just go out and spend a crazy amount of money on a bullpen because you have to be able to rely on the guys in your organization to get the job done.

“Pitching wins championships. Development wins champions. Being able to develop and what it takes to develop wins championships. I thought a lot of young guys came up this year and did a great job for us. If that’s (Alec Bohm). I think putting JoJo (Romero) in certain situations, I thought he did a great job for us. (Connor) Brogdon, I thought he did an unbelievable job for us. Spencer (Howard) is going to be Spence the more he gets healthy and the more he understands how to pitch in the big leagues. I think he’s going to be very good for us as well.