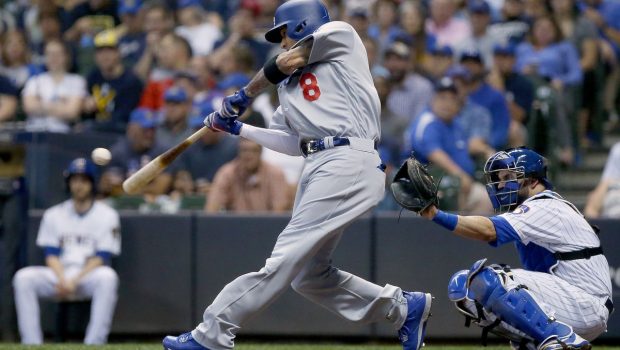 IF PHILS DON’T PURSUE MANNY MACHADO, THEIR FANS SHOULD BOLT!

“If you’re trying to find the young free agent who’s good at everything and a prince in the clubhouse, you’re going to be looking for a long time,” Phillies Matt Klentak said at the GM meetings in Carlsbad, California, yesterday “You’re not always going to find somebody who checks off every box.”

That was the Phils Boy Genius Big Boss drawing a line in the sand about the pursuit of free agent Manny Machado.

Without mentioning his name.

The two free-agent superstars are Bryce Harper and Machado, and some people have been turned off by Machado’s play and attitude during the Dodgers’ World Series loss to the Red Sox.

Machado remains a fascinating topic because a player who once looked like a slam dunk now seems a bit risky, especially if he commands a contract in the neighborhood of $300 million.

A player who signs that type of deal immediately becomes the face of the franchise, good guy or not, leader or not, hustler or not.

“When we are evaluating players, we do our best to evaluate the total player, everything that player brings to the table,” Klentak said. “Offense, defense, baserunning, their makeup and work ethic, their age, their health histories and a couple other things. We factor in all of those characteristics into how we evaluate the player. We make roster and contract decisions accordingly.

“It’s unlikely you’re going to find a player that’s elite in every single one of those areas. If you do, he’s probably not going to be a free agent. Sometimes you have to pick and choose what you’re willing to bet on.”

Machado is one of the game’s best players playing a premium position and entering the prime of his career.

The shortstop is just 26, and he could get better.

But the rest of the Machado package muddies the waters. If Machado acts and talks like this now, what might he do and say with $300 million in his bank account?

“We have to factor in everything,” Klentak said. “I’m being vague because I don’t want to address that particular player, as you can tell. But it’s something that we will incorporate into our decision-making process, whether it’s a superstar player or a complementary player or whether it’s extending an internal player, whether it’s a Minor League free agent, whether it’s hiring a staff member. We really do a thorough assessment of the individual. We’re going to evaluate that, and the decision might be to not sign that person. But it really comes down to the balance of all the factors. It’s not that complicated.”

Machado’s price tag could be a factor in how much the Phillies might overlook. Some have speculated that he could best Giancarlo Stanton’s 13-year, $325 million deal signed in November 2014.

Would the Phillies ever make that long of a commitment?

“You have to take it on a case-by-case basis,” Klentak said. “I was part of the Angels in December 2011, when we did a 10-year contract with Albert Pujols. That was not the only time in baseball history that somebody has signed a contract of that length. Really, you have to take it case by case. It’s about the conditions that exist at that moment, both for that franchise and for that player. You know this, I don’t like to operate in absolutes. I don’t want to say we would never do this or never do that. You have to be open-minded and willing to make adjustments, but there are inherent risks in a contract of that length.”