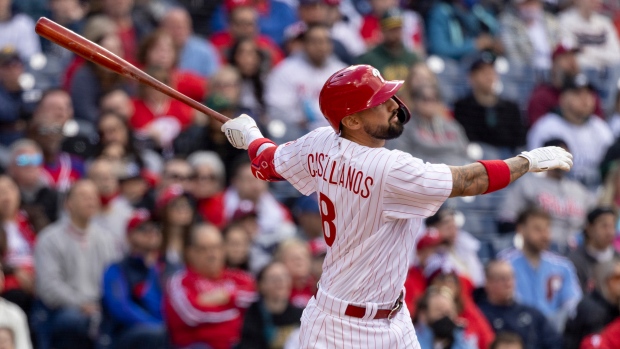 CASTELLANOS WOULD BE BENCHED IF HE WEREN’T MAKING $100M!

Nick Castellanos hasn’t been a total bust in his first year with the Phillies.

Interim Phillies manager Rob Thomson dropped Castellanos and his .245 BA and 8 HR’s down to the No. 5 spot in the lineup yesterday from the No. 3 hole.

Castellanos signed a 5-year, $100 million free-agent in the offseason but has struggled.

The demotion came a day after Castellanos and a longtime local beat writer got into a heated postgame exchange that went viral on social media when the reporter objected to Castellanos calling a question about fans booing him a “stupid question.”

Things got a bit contentious in the #Phillies clubhouse tonight during and after Nick Castellanos' media availability and our @6abc cameras were there. Thoughts on this exchange? pic.twitter.com/DcqmbIpz2e

Castellanos was loudly booed after striking out swinging in his first two at-bats before receiving raucous cheers for a seventh-inning single. He heard boos again after popping out foul to first to lead off the ninth.