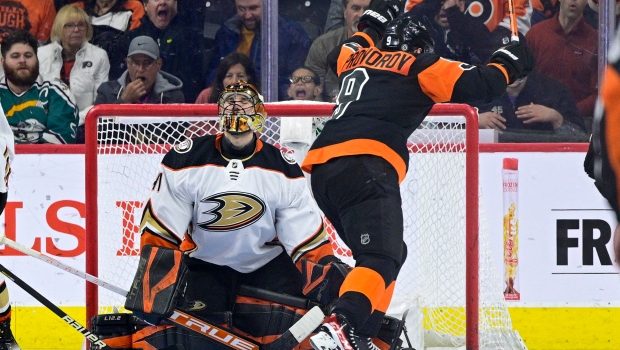 IF IT SKATES LIKE A DUCK, IT’S ANOTHER FLYERS LOSS!

“If it skates like a duck, it’s another Flyers loss.”

Trevor Zegras scored two goals to lead the Anaheim Ducks to a 5-3 victory.

“We came out with the right mindset,” Flyers interim coach Mike Yeo said.

“Obviously, got off to a hot start and probably just assuming that maybe we thought it was gonna be a point night and wanted it easy in the second period. We stopped being physical. Execution was a big problem, through the neutral zone especially. And I thought just 1-on-1 battles and the hardness of our game was lacking, and we let them take the momentum and run with it.”

The Flyers entered 14th of 16 teams in the Eastern Conference with 57 points while the Ducks were 12th of 16 clubs in the West.

The Flyers scored the only two goals in the first, with Sanheim’s wrister just 1:39 into the contest putting the club on the board and Attard netting his first career goal from long range just 1:11 later.