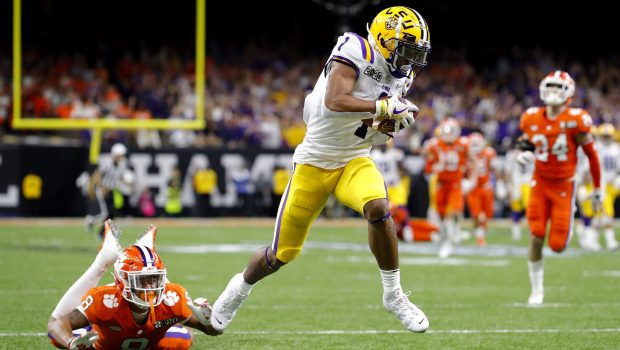 IF HE’S AVAILABLE AT 6, EAGLES SHOULD DRAFT WR JA’MARR CHASE!

The Eagles enter next month’s NFL draft with the sixth overall pick, and it’s still unclear what boy wonder GM Howie Roseman will do with it.

If Ja’Marr Chase is available, they should take him without hesitation.

Even though we all witnessed DeVanta Smith win the Heisman Trophy while Chase opted out of the season, the LSU Tiger is still being considered the best wide receiver prospect in the draft. He finished the 2019 season with 84 receptions, 1,780 yards, and 20 touchdowns.

His 6-0, 208-pound frame makes him the perfect prototype to dominate the NFL.

Lining him up on the outside with Jalen Reagor in the slot, and Dallas Goedert at tight end would give the Eagles firepower they haven’t had in years.

Jalen Hurts has the athleticism to keep the play alive with his legs, and showed flashes of potential in the few games he played last year.

Considering the fact the NFC East is so weak, this could be a draft selection that pushes the Eagles into playoff contention next season.