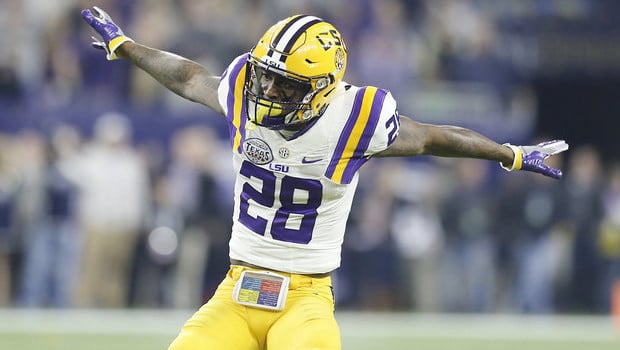 IF HE STAYS OUT OF TROUBLE, EAGLES DB MILLS WAS STEAL OF DRAFT!

That is, LSU defensive back Jalen Mills and not North Dakota State QB Carson Wentz.

With at least one defensive back selected in nine of the past 10 drafts, LSU has become a virtual minor-league team for NFL clubs in need of help in the secondary.

And while he may lack the elite athleticism or stopping power that helped Patrick Peterson (Arizona Cardinals) and LaRon Landry (New York Jets) earned Pro Bowl honors after starring in the SEC, Mills offers plenty of traits which project well to the next level, including agility, instincts and versatility.

The 6-1, 191-pound Mills started 46 games at LSU, beginning his career outside at cornerback before sliding inside to handle safety and nickel duties as an upperclassman. During that time, Mills recorded 216 tackles, 16 pass breakups and six interceptions.

The only games in which Mills did not start for the talent-rich Tigers were the first six games of this past season — when he was rehabilitating a fractured left leg (fibula) and torn ligaments in his ankle. Mills returned to the field in a backup capacity against Florida before earning back his starting position for the final six contests of the year and competing at the Senior Bowl.

Mills excelled in Mobile, showing terrific quickness, balance and awareness in coverage at cornerback. Mills essentially ran the routes for receivers there, showing the anticipation of routes one would expect given his experience at LSU.

A poor showing in the 40-yard dash at the scouting combine (electronically timed at 4.61 seconds), however, raised concerns for some as to whether Mills possesses the straight-line speed to handle NFL receivers. Mills appeared to answer those questions by being clocked at 4.47 seconds (handheld) at LSU’s pro day. This time more closely resembles the speed and fluidity with which Mills played throughout his career with the Tigers. Some players run fast on the track. Others play fast. Mills is among the latter.

The “other” reason Mills fell in the draft was a 2014 arrest for battery of a woman. While the charge was ultimately dropped to a misdemeanor, clearly teams were concerned about Mills’ character.

Without citing Mills specifically, Eagles general manager Howie Roseman acknowledged that off-field issues were a concern for some of his club’s later picks.

“Players are going to have to look at their actions to see why they didn’t go where they feel like they should have in the draft,” Roseman said. “It’s very clear that teams are looking at that. We see that … throughout the draft when you make questionable decisions in your life. It’s affecting you going forward. And it’s costing these guys a lot of money.

“I think this is a huge wakeup call for these guys to understand that you made one mistake, now this is your job and this is your livelihood.”

The Eagles officially list Mills as a safety, and he has shown the generally reliable open-field tackling skills and awareness to handle being the last line of defense.

Don’t be surprised when he is asked to drop down and handle coverage duties against the ultra-quick slot receivers of the NFC East as well.

This versatility — and the hunger to redeem himself after his surprising tumble into the seventh round — could make Mills one of this year’s biggest steals.