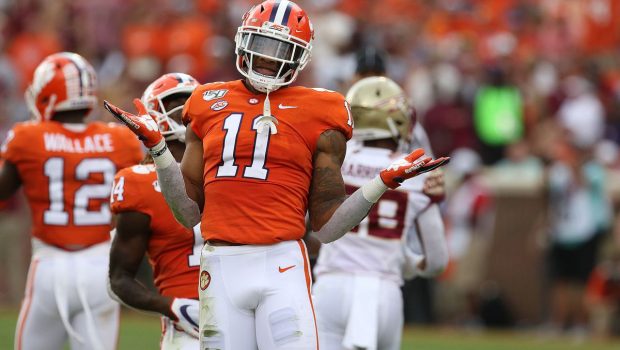 The first of the Eagles 10 picks in the April draft comes in at No. 21 overall.

They should trade up and go for a real immediate game-changer.

The Eagles are in desperate need of a few things.

On offense, they are barren at wide receiver. Getting a star there could change things quickly though. Jerry Jeudy is the most popular big name in the draft. However, this is a position with a lot of big names. So trading up for a receiver isn’t that necessary.

Then there’s defense, and the Eagles are in desperate need of help at lineba ckersecondary. Do you know who’s being billed as a generational type talent? Isaiah Simmons.

He’s getting that superstar treatment already. People are saying he could immediately change a defense.

While you could make an argument that it’s not necessary to trade up for Jeudy, due to the rest of the wide receiver talent in the draft, you can’t make that same case for Simmons. He is elite talent above the rest. And there’s a chance he’s still available around the 10th pick.

So the Eagles could realistically trade up without having to give up too much. That would definitely be worth it.

So do you really need 10 of that when you’re looking for a superstar? Or do you trade some of those picks to get closer to a “sure thing”?

Remember, they traded up to get franchise quarterback Carson Wentz back in 2016!