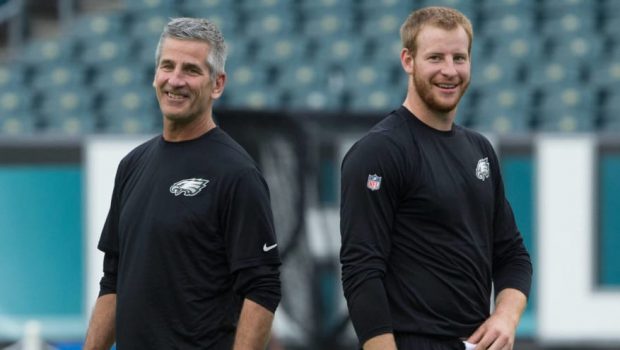 IF EAGLES DITCH WENTZ, REICH AND COLTS WOULD LOVE TO HAVE HIM!

It’s been a tough week for Eagles quarterback Carson Wentz, who is having the worst season of his five in the NFL.

Twelve interceptions and four fumbles that led to loss of possessions, in case you hadn’t noticed.

So will overthrows and underthrows.

So, as the Eagles take a bye today, the talk in Philly is about Wentz and what to do with him.

WIP spoke with Boomer Esiason on Friday and here’s what he said:

“I want playmakers around him first. I don’t know his relationships with his coaches. I used to know his relationship with his coach because his coach [Frank Reich] was my college roommate, and my college roommate loves Carson Wentz. I would even tell you that if the Philadelphia Eagles ever wanted to trade Carson Wentz, the Indianapolis Colts would be first in line to make that trade. I’m telling you. That’s how much confidence he has in that kid.”

Reich, now the head coach of the Colts, was Boomer’s backup quarterback during their days at the University of Maryland. Once Boomer graduated in 1983, Reich took over as the starting quarterback and led the Terps to the biggest comeback in NCAA history (at the time) against Miami.

Of course, Reich and Wentz worked together during his years as the Eagles offensive coordinator from 2016 to 2017. The year the Eagles won the Super Bowl was far and away Wentz’s best season. Three years later and in his fifth year, Wentz is having the worse campaign of his career. Boomer was asked about his thoughts on the struggles this season and his outlook on the quarterback:

“I just think he is out there with young, inexperienced players, no real explosive, big time player makers. DeSean Jackson can’t get on the field at all. It is what it is because of his personality and his competitiveness and I think that’s why he is trying to do a lot on the field. That’s why Phil [Sims] and I both say we don’t believe anybody works any harder at the position than Carson Wentz does. Right now, he is a victim more of his circumstances than anything else.”

2 thoughts on “IF EAGLES DITCH WENTZ, REICH AND COLTS WOULD LOVE TO HAVE HIM!”