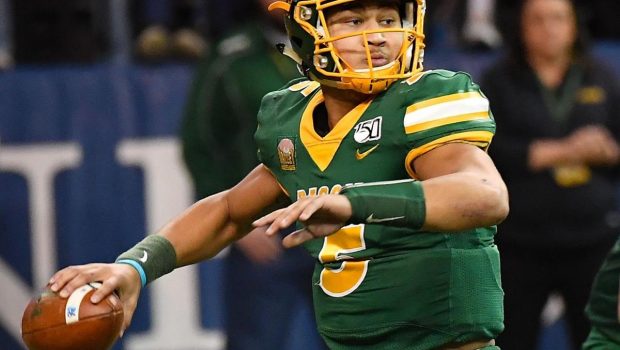 EAGLES SET AT QB — WHY ARE THEY AT TREY LANCE’S WORKOUT TODAY?

But as ESPN’s Chris Mortensen reported earlier this week, Eagles owner Jeffrey Lurie had instructed his scouting staff to move forward with Jalen Hurts as the starting quarterback, which would seem to preclude them taking a quarterback in the first round.

The 6-4, 230-pound Lance had an incredible 2019 season for the Bison, completing 67 percent of his passes, throwing 28 touchdowns and no interceptions and rushing for 1,110 yards. North Dakota State went 16-0 and won the FCS national championship.

This past year, Lance played in only one game – North Dakota State’s single fall game. He completed 15 of 30 passes for 149 yards with two TDs and his first career INT in a win over Central Arkansas. North Dakota State is playing this spring – they’re 2-1 and ranked No. 5 in the FCS – but Lance is no longer with the program.

One thought on “EAGLES SET AT QB — WHY ARE THEY AT TREY LANCE’S WORKOUT TODAY?”