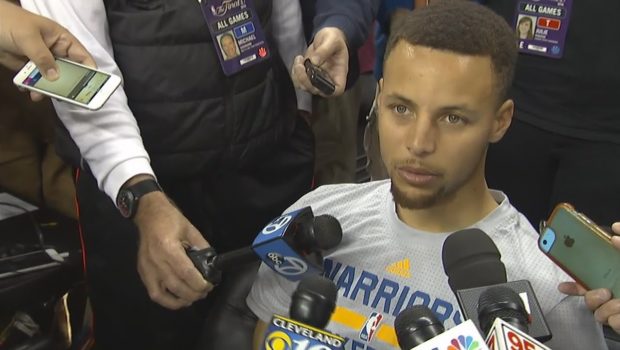 IF DUBS LOSE GAME 7, WHAT WILL NBA WORLD THINK OF STEPH CURRY?

The whole world will be watching tomorrow night’s game 7 of the NBA finals.

And no one has more riding on the Golden State-Cleveland game that will decide this year’s NBA champ than Steph Curry.

But as the Warriors find themselves on the defensive, the question arises: What exactly is at stake for Curry?

For two seasons, Golden State has been a media darling and a delight to watch with their effervescent rhythm offense and murderer’s row of shooters allowing every gangly kid with access to a court to imagine himself the next great freewheeling gunner.

But in the playoffs, and throughout their record-breaking season, the story has abruptly changed. Draymond Green has revealed himself to be an unrepentant heel, the kind you want on your team but absolutely loathe if he’s targeting your guys in the junk.

Curry has become a flashpoint of debate over whether his gunning ways are ruining the game, if he’s sufficiently humble, etc. It all came to a head in game 6, when LeBron James and the Cavaliers held steady against a consistent Warriors attack, forcing the decisive Game 7.

LeBron was his expected brilliance, as he became the first player since Shaq to post back-to-back 40 point games in the finals. And he took control of the game—and getting the better of Curry—in a way that suddenly flipped the script. Here was the best player of his generation reclaiming the hype from a usurper.

There were two defining images from the game: LeBron trash-talking Curry after blocking him with the ease of a father swatting away a three-year old’s shot on a mini-hoop, and Curry losing his cool while whipping his mouth guard into the crowd after fouling out of the game (on what was, admittedly, a pretty weak call) and getting ejected. Now, Golden State’s storied season could be rendered irrelevant with a loss on Sunday.

“The record 26–0 start, the record 73 wins, Curry’s unanimous MVP, Kerr’s Coach of the Year award, All-NBA selections for Curry, Draymond Green and Klay Thompson—all will be subjected to a gigantic ‘Yeah, but …’ asterisk,” writes Sports Illustrated’s Ben Golliver. “There are no outs here and the Warriors know it.”

And if the Warriors do end up losing, and find themselves in front of the firing squad for the first time, the loss will be owed to an all-time performance.

“The obvious truth, however, is that James is authoring a basketball tale that just might go down as the best of all time,” writes USA Today’s Sam Amick. “Not only is he turning in the kinds of virtuoso performances that are adding to his Hall of Fame resume’, but he’s demoralizing a fellow great and his all-time team along the way. The Warriors, from Curry on down, are shook.” It’s happened before, and the Warriors have recovered. But the stakes have never been higher.