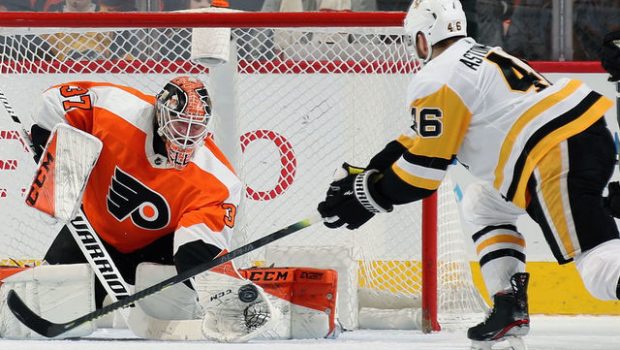 The Flyers have adopted a CIA-like cone of silence about goalie Carter Hart and his absence from yesterday’s practice after bolting from Tuesday’s.

So we can only speculate.

According to NBC Sports Philly’s Jordan Hall, Hart left quietly during the first period of a Flyers scrimmage. Hall notes that it was unlikely to be an equipment issue, being that Hart did not return.

For fans hoping for optimism, Kevin Hayes‘ comments bring a mixed bag. He seems upbeat about it … but Hayes also didn’t notice that Hart left. Maybe he’s not totally clued-in, yet any insight is welcome as NHL teams prefer the “keep everyone in the fog” approach.

“I think it’s nothing too serious,” Hayes said, via Hall. “Obviously it’s important to get into shape and get game-ready, but if you have something that’s minor that you don’t want to push, it’s not a big deal to get off the ice like that. We’d rather have him be 100 percent than pushing hard at like 85, 90 percent. Probably a smart decision by him. I don’t think it’s anything major.”

Flyers such as Sean Couturier said all the right things about Brian Elliott being capable if Hart is unavailable, but if we’re being honest, it’s tough to be too confident in Elliott at this point in his career.