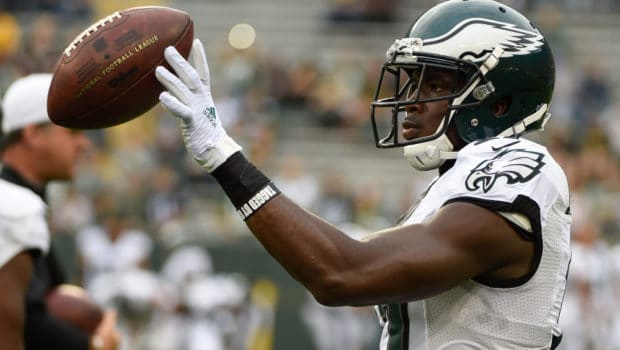 Sooner or later — and I suspect it will be sooner — Eagles wide receiver Nelson Agholor is going to get a visit from coach Doug Pederson for a come to Jesus meeting.

The fact is, if he hadn’t been a No. 1 draft pick Agholor might be gone already!

Agholor has just two receptions for 30 yards in preseason action.

The Eagles coaching staff says it knows what he is capable of doing. They are taking a patient approach to his development. Despite the lack of success, Pederson is not worried about Agholor and doesn’t feel he needs extra work.

“He’s right on track with where he needs to be, so I’m not concerned with Nelson,” Pederson said before practice on Monday. “Is there the occasional drop here or there? Yeah. What he did after the drop (against the Colts), you probably didn’t notice the blocking downfield, the things he did away from the ball.

“More than being a receiver — obviously, catching the ball is number one — but we pride ourselves on being physical in the run game and blocks down the field, and the things he did in this football game put him in a really good position going into the regular season.”

Jordan Matthews is now the leader of the Eagles locker room. He made a good point about developing young receivers such as Agholor.

“I was talking about it yesterday. One of my favorite receivers, Jordy Nelson, did not go for 1,000 yards until his fourth season,” Matthews said. “Nobody was really paying attention to it because he had a guy like Greg Jennings. You look at the Steelers; nobody knew how great AB (Antonio Brown) was but the Steelers. They had Mike Wallace at the time. You just draft guys, get them better and you want to bring them into this system.”

In the meantime, Agholor is finding ways to stay positive despite not putting up the numbers that any competitor would want to.

“It’s about doing your job,” Agholor said. “When we ran the handoff to Huff in the red zone, there was one guy left to make that play, and I had to make sure my guy didn’t make the play.

“I have responsibilities in the run game. We had a third down outside run, and No.32 was in the box, and I had to seal him for Ryan Mathews to make the run. Deals like that are just as important to me.”

The drops will have to be eliminated, and Agholor is well aware of that. For him, it is just a matter of locking in on the football as it comes to him. When the ball is in the air, it needs to be his focal point.

Agholor is known for his ability to make plays with the football once he gets it in his hands. The important part is securing the catch first. That is something that Agholor and the Eagles receivers will continue to work on.

His quarterback Sam Bradford is confident that things will click for Agholor. Bradford is pleased with the selfless attitude that Agholor puts out even when he doesn’t get the football.

“If you look at the tape and see the way that he plays,” Bradford said. “The effort that he gives in the run game and blocking down the field for other receivers, it was the best I have seen from him. He can continue to grow and be a valuable piece in this offense.”